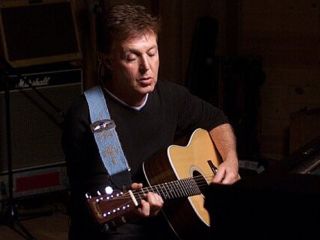 Sir Paul McCartney is attempting to do what The Beatles never could: play a gig in Israel. The Fab Four were banned from the country 43 years ago because its education minister at the time David Zarzevski believed the music might corrupt Israeli morals.

Earlier this year, McCartney and Ringo Starr (and the relatives of John Lennon and George Harrison) received a letter of apology from the Israeli government, inviting them to be a part of the country's 60th birthday bash and "correct the historic omission". Now, according to The Sun newspaper, Sir Paul is: "pushing to make it happen".

"Paul is desperate to put Israel on the map of places he's performed", the source added.

Rumour has it that the former Beatle will perform to 250,000 fans in Tel Aviv, as early as this September. The nation's Ramat Gan football stadium and Hayarkon Park have been earmarked as possible venues.

It's hardly on the same scale, but a lifetime ban on The Rolling Stones playing in Blackpool was recently lifted after 44 years. The banishment followed a riot at a Stones' gig at the Blackpool Empress Ballroom in 1964. Unlike Sir Paul McCartney, Sir Mick Jagger and co. have failed to respond.