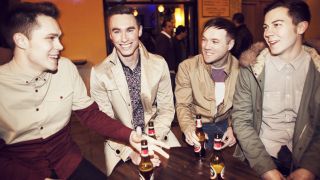 Intelligence:"We're a live band, its all about getting out on the road and connecting with the audience," says Don Broco guitarist Simon Delaney. "We've always wanted to be a great live band."
Well, it's a good job that they've got the chance to stake their claim, as February sees a near-as-dammit sold-out UK tour for the Bedford pop rock foursome.

The Bedford boys, completed by frontman Rob Damiani, drummer Matt Donnelly and recently added bassist Tom Doyle, began honing their live chops while at University - although they didn't find their Incubus-meets-Biffy sound right off the bat.

"We went through a few different changes and wrote loads of songs, some really heavy, some really soft. We realised we weren't very good at being a really heavy band so we reined it in! We wanted catchy big choruses and interesting, melodic music."

With a sound finally decided on, the boys upped their game when heading into the studio to record 2012's pop rock cracker Priorities.

Full to the brim with big riffs and stadium-sized hooks (just check the title track and new single Fancy Dress if you don't believe us) the record set down an almighty marker for things to come. Simon admits that when it came to hitting the studio they had a little help from a friend.

He says: "Our producer Dan Lancaster had a massive influence, he brought the songs together in a way we wouldn't have been able to. He's a bit of a genius. He's got an ear that we don't share, we're creative but he can pick out what works and what doesn't."

The February dates mark the band's first full headline tour, and Simon lets slip that the heat is on - it's time to step up to the plate and cast aside the support tag.

"There is quite a lot of pressure, as a support band there's always that feeling that you're going to smash it and convert people, but as a headliner we need to raise our game and give people something extra beyond what they get from a support. We've looked into production for the first time to make it more memorable."