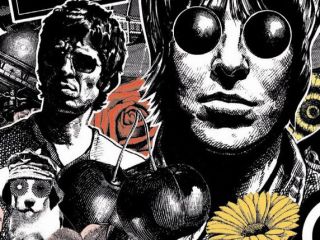 Oasis are currently mixing their seventh studio album, due in mid 2008

During a recent bargain hunt on Ebay, we noticed this auction for a guitar that the current owner purports to be the 1983 Epiphone Rivera owned and played by Noel Gallagher in the mid 1990s.

Not only does the instrument feature in the Don´t Look Back In Anger promo video, amongst others, but it is also thought to have been one of the main guitars used by Noel during the (What´s The Story) Morning Glory? album sessions.

At the time of writing, the price for this piece of Britpop history was a mere $4000, with a grand total of zero bids and less than 48 hours remaining auction time. Should this prove to be the real thing, then we´d regard it as a decent investment worth stashing under the bed until the next Britpop revival.

Verve guitarist Nick McCabe´s 1979 Stratocaster - seen here being given a serious workout at 1993´s Glastonbury festival - also sold recently on Ebay for around £1200. Who knows what other Britpop artefact will appear on the auction site next? Jarvis Cocker´s glasses? Rick Witter´s mic stand? Menswear's career?

If you have a cool £3.9 million floating around, then there´s always Wheeler End Studios in Buckinghamshire, UK. Formerly leased by Noel Gallagher and used by Oasis, the residential studio went up for sale in January 2008.

We´ve pooled our collective funds at MusicRadar and managed to collect £6.38, an unused train ticket and a couple of plectrums...