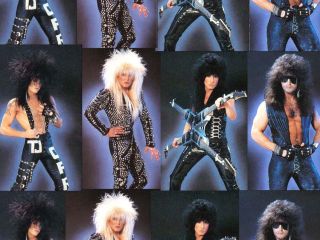 When hair was big, and men looked a little bit like ladies

Former Nitro vocalist and UFC hard man Jim Gillette has given the strongest indication yet that the hard rock band may reform in 2009.

Backstage after spouse Lita Ford's performance at the Oklahoma's Rocklahoma Festival - see what they've done there? - Gillette was asked if the band would ever return to the stage.

His response was as follows: "It would be great to do; maybe next year. It would take about six months to get back to where I would like it to be vocally."

Presumably, Jim won't have to look much further than one of his own vocal training courses for advice on how to build that all-important vocal strength:

All he needs to do now is persuade fleet-fingered guitarist Michael Angelo Batio to pull himself away from his current position as a shred show pony at industry events and rejoin the fold.

The current whereabouts of TJ Racer and Bobby Rock are anybody's guess...