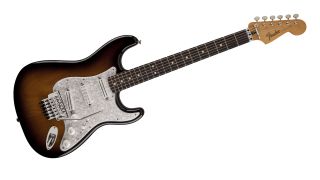 The new model sees Fender and Murray focus on emulating his onstage favourite with three singlecoil-sized humbuckers, including two Seymour Duncan Hot Rails and a JB Jr. This in contrast to the previous model's HSH configuration.

Aside from a Floyd Rose vibrato and nut and a suitably speedy compound radius fingerboard, the other features on the California Series Strat remain quite traditional and there's no coil-splitting electronic trickery etc.