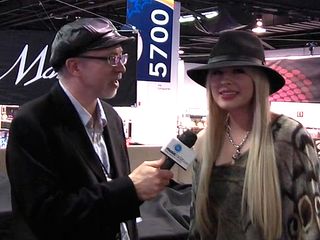 NAMM 2012: This is what we call a nice way to start the day: catching up with guitar star Orianthi atop the Dean Markley booth.

In the years since she came to the world's attention as guitarist for the late Michael Jackson, the Australian-born shredder has released the album Believe, teamed up with Steve Vai for the song Highly Strung, issued the Dave Stewart-produced EP Fire and toured extensively with Alice Cooper.

Orianthi's dance card for 2012 is already filling up, and by year's end we should be hearing a full-length album, which will mark the continuation of her collaboration with Stewart. We chatted with her about working in Nashville with the former Eurythmic, what she's learned from her musical pairings and more.