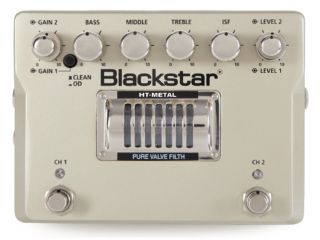 The HT-Metal is a two-channel pedal offering everything from a clean boost to ultra-high gain, with Blackstar's Infinite Shape Feature tone control. Blackstar is calling it a 'filth machine', check out the press release below for full details.

The tone has been benchmarked against the best high-gain valve amps in the world and will transform even a mild mannered classic into a fire breathing monster.

As with other pedals in the award winning series (HT-Boost, HT-Drive, HT-Dist, HT-Distx and HT-Dual), the HT-Metal is powered by a 300 Volt H.T. valve circuit for true valve dynamics and feel.

The two cascaded ECC83 triode stages give more extreme gain than ever before and each ultra-high gain channel has its own gain and volume controls. Channel 1 is also equipped with a Clean/Overdrive switch so the pedal can be used for clean, overdrive, or high gain.

Housed in a rugged metal case, the HT-Metal boasts a high-integrity buffered bypass for silent switching.

There are two outputs. The first is designed to connect to an amplifier or to the guitarist's other pedals. The second is a new benchmark design, speaker emulated output allowing the guitarist to get real valve (tube) tones direct to disk or tape. So whether you're playing live or recording, with the HT-Metal you can finally get the sound in your head.