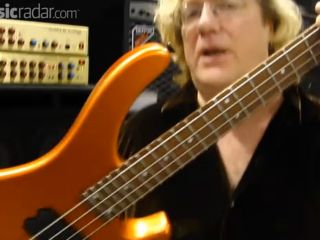 NAMM 2011: For over two decades, Stu Hamm has been a uncompromising and influential force in the bass community. Aside from his stunning and versatile playing with everyone from Steve Vai to Joe Satriani to Eric Johnson to you name 'em, he's also released a string of critically acclaimed solo albums, including the all-new Just Outside Of Normal (which we'll be talking to him about quite soon).

When it comes to bass design and construction, Hamm also knows a thing or two about a thing or two: his Washburn signature acoustic bass, the AB40SH, has been a smash success. And now Hamm and Washburn have teamed up to create an electric four-string, the appropriately named 'The Hammer.' In the video above, the man himself tells you all about it.