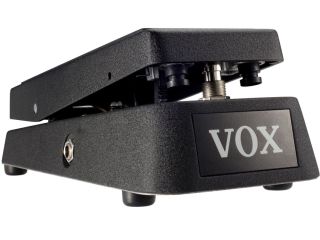 Designed to withstand the rigors of life on the road, the V845 features a solid yet lightweight die-cast aluminium housing, as found on authentic VOX wah pedals from the 1960s. Cosmetically, the V845 creates a vintage mood with its period-authentic black crepe finish and black-on-black pedal surface.

VOX developed the world's first wah-wah effect in the 1960s. From the earliest days of rock music, it met with acclaim from guitarists the world over with its famous "talking" tone. The unmistakable wah-wah sound has been heard on countless masterpiece recordings and legendary live performances.