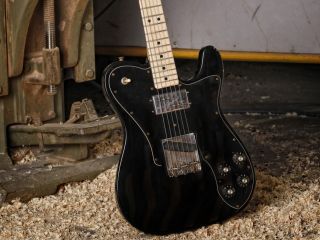 PRESS RELEASE: The best of Fender's best comes from the world-famous Fender Custom Shop in Corona, CA, and 2010 is already shaping up as an amazing year at the "Dream Factory." The Custom Shop is proud to introduce several highly-distinctive and incredibly-limited new instruments, including several 60thanniversary models.

The 60th anniversary of the Fender Telecaster guitar is celebrated this year by a unique and unprecedented release of some of Fender's most collectible and historical instruments, all limited to 60 pieces each globally.

The 60th Anniversary Limited Telecaster Proto is a reproduction of the prototype that Fender used to take around clubs for artists to try. It is from this guitar that the Telecaster blossomed and changed the musical landscape forever.

The 60th Anniversary Limited Broadcaster guitar is a reproduction of one of the most collectable Fender guitars ever. Probably only 200 were ever made originally before the Gretsch Company sent a letter asking Fender to change the name because they owned the name Broadkaster. This is the first time the guitar has been reproduced with the original logo since then.

The 60th Anniversary Limited Nocasterguitar is also a reproduction of an incredibly-rare Fender guitar - the Nocaster. After Gretsch Company asked Fender to drop the Broadcaster name, Fender simply cut the decals so that they read, "Fender" only. These guitars were made until the Telecaster name was introduced in 1951. It is believed that only about 475 Nocaster guitars were ever produced.

Celebrating the 1950s look, but with modern features, the Limited 1958 Candy Apple Red Stratocasterguitar (limited to 30 pieces globally) is built for the working musician. It features hand-wound Abigail Ybarra pickups with a reverse wound/reverse pole middle pickup so that in the second and fourth positions the pickups cancel any hum.

The guitar also has a flatter radius and taller 6105 frets allowing for easier bending. The wiring is what we call a "Modern Strat" wiring, and allows the tone control for the middle pickup to also work on the rear pickup so that you can roll off the high-end on the rear pickup if needed.

The Limited Custom Black '70s Stratocaster guitar (limited to 30 pieces globally) is a modern twist on an iconic Stratocaster that evokes an era where Fender changed materials and features, which also affected the music that these guitars were used for.

The introduction of the three-bolt neck system came in the early 1970s along with a micro-tilt adjustment that allowed the user to angle the pitch of the neck to their liking. The cast tremolo bridge also made its debut around this time, as well as the non beveled pickup magnets. This guitar has a flatter radius, and taller 6105 frets for easier string bending. The pickups are hand-wound by Abigail Ybarra who was hired at Fender in 1956.

The Limited 1972 Black Telecaster Custom (limited to 30 pieces globally) is a step back to the 1970s, but with modern features, and it is built for the working musician. The '72 Tele Custom is iconic and truly built for rock music. The guitar has a flatter radius and taller 6105 frets allowing for easier bending. The pickups are a custom wound front Fender humbucking pickup, and a rare hot Nocaster bridge pickup allowing for great chunky rhythm tones, and searing Tele lead tones as well.

These are just some of the instruments offered in the Fender Custom Shop's 2010 Custom Collection. Also this year, there are plans to recreate and release 83 pieces of John Mayer's Black Stratocaster guitar he calls the BLK1.