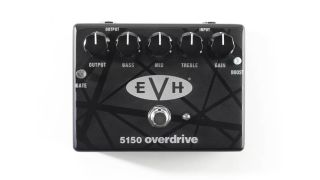 First came the phaser, followed by the flanger, then the wah… and now Eddie Van Halen finally has a signature overdrive pedal to his name in the form of MXR's EVH 5150 Overdrive.

Utilising multiple MOSFET gain stages, combined with a three-band EQ, the 5150 Overdrive promises versatile valve-like tones through all kinds of amps and speaker cabs - including the "whole spectrum" of EVH tones, from Eruption to A Different Kind Of Truth.