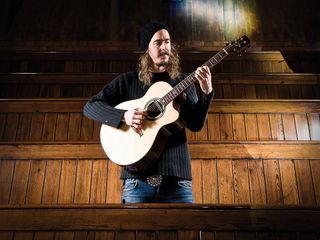 The Opeth main man's progressive death metal credentials are beyond doubt, but will Mikael Åkerfeldt cower in fear when confronted by the 10 questions we ask everyone...

"It was a Levin nylon string. I got it from my grandmother. I was very young - I was probably seven or eight. I smashed that one up but then got another one from her!

"I wanted an electric guitar. In those days, to have an acoustic guitar was wimpy! I felt ashamed. I had a guitar but it was like not having a guitar because it was not electric. I remember painting knobs on it. But it was a good guitar; all solid wood."

The building's burning down - what guitar from your collection would you save?

When is the last time you practised and what did you play?

"Yesterday. I didn't practise, I played. For some reason, because of that Trameleuc nylon string, it's so nice, I picked out the acoustic mid-section from Yngwie's Suite... Opus... whatever it is! [Trilogy Suite Op: 5 - Ed] I always wanted to learn it and now I know how to play it."

"Again, on that guitar, yesterday. I do it all the time but on tour, never."

What are you doing five minutes before you go onstage...

"As a collective, we shake hands when the intro's rolling. That's the only thing we have to do. Depending on how my voice is, I warm up the voice a little bit. I know this is a guitar magazine, but voice comes first for me when I play live - I need it to be in as good shape as possible. It's probably in a toilet, usually someone has just taken a s**t..."

...And five minutes after?

"I'm having a cigarette and a beer. Right away."

What's the worst thing that's ever happened to you onstage?

"We played a beautiful festival in southern Germany. I was going to go down to the barrier to rock out with the crowd - one of the very rare moments I do that - but that day I was in the zone! The fence had bars I didn't see, so I was walking and just tripped over... it really hurt and both my shins started bleeding."

What song would you play on acoustic around a campfire?

"Well, the whole purpose of that is that people are going to join in, so it would be something easy that you can play when you are drunk. Knocking On Heaven's Door, or some s**t like that!"

What's the closest you've ever come to quitting music?

"Every day. Not listening to music, but playing... sometimes I don't want to do it any more. It's not that I don't love it, because I do. It's because I love it. It sounds weird and it's hard to explain. I have confidence issues and sometimes I feel like I should not be doing this! But also, on the other hand, it's what makes me me. It's a weird feeling to be honest."