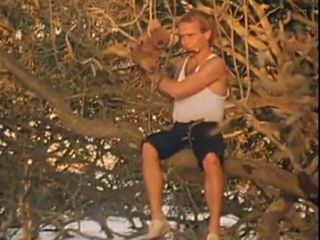 Men At Work flautist Greg Ham may soon be down and out over the song Down Under. According to an Australian judge, Men At Work must pay five percent of the song's royalties to the publishers of a classic children's song.

Last Tuesday, it was decided that Ham's distinctive flute riff to Men At Work's massively successful 1982 song had been copied from the campfire tune Kookaburra Sits In The Old Gum Tree. (No, we never heard of it, either.)

"At the end of the day, I'll end up selling my house," Ham told the Age newspaper. Because of Ham's now-infamous flute melody, the Men At Work multi-instrumentalist currently receives a small percentage of the song's royalties. This, however, will change very soon. "We'll face massive legal costs," Ham said. "I'll never see another cent out of [Down Under] again."

Although Ham contends that the campfire classic had no bearing on his flute melody ("I was looking for sounding that sounded Australian - that's what came out"), he's frustrated that his legacy will now forever be tarnished. "It will be the way the song is remembered, and I hate that," he said. "I'm terribly disappointed that it's the way I'm going to be remembered - for copying something."

What do you think? Was the ruling fair? Compare the two melodies in the video below: