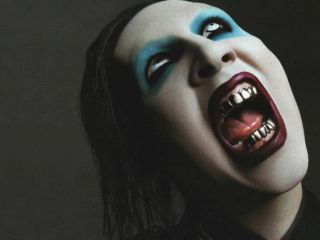 Manson likes to write on walls

The idea of Marilyn courting controversy...imagine that. But Manson says his new album, The High End Of Low, is his most extreme yet because of its autobiographical nature.

"I wrote all the lyrics on the wall of my room," Manson told Kerrang! magazine recently. "It wasn't to be decorative; it was one of those things, like it's the last thing someone sees before they put them somewhere else. I think it looks good. And if anyone wants to come into this room and fornicate with me, I think they are a keeper…and when I say keeper, I mean kidnapping."

"I am probably going to do most of the press for the record from my house, before I leave or destroy it, because you can see the story and what the record as made from within the house."

Produced by Manson, keyboardist Chris Vrenna and returning guitarist Twiggy Ramirez, The High End Of Low was recorded in Manson's Hollywood Hills studio and also features the track I Want to Kill You Like They Do In The Movies.

"This is not a record that we would leave black and self-titled and mature," said Manson. "This is the experienced record. This album is the 12th-grade guy that has VD and did cocaine in high school, who has been arrested once and the 9th-grade girl wants to fuck him."

Well, OK then. Like we said, Marilyn Manson courting controversy...strange, huh? Of the album's last track, 15 (the 15th song, duh), Manson said, "It's the most important song I think that's been written by Marilyn Manson as an entity

"It's the most unusual song I have ever heard. I thought that the album was done, as there is a glorious epic track [before that] that I think will make Twiggy forever recognized as a guitar hero. That felt like the end of the record, but what was happening in my life had not resolved itself. So on January 5, one five, I sang '15' and the lyrics will tell the story of that day…"

Like him or not, Manson sure knows how to work a new record.