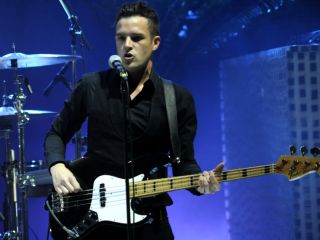 Although it seems as though they're still a new group, The Killers have been around long enough to have areleased five consecutive Christmas singles - and this week they're making it six with The Cowboy's Christmas Ball.

The Vegas-based quartet has been on a hiatus for the past year or so, but they've recently started demoing songs together, and presumably these sessions yielded The Cowboy's Christmas Ball.

The song is a cover of the 1991 track by Michael Martin Murphey from his album Cowboy Christmas: Cowboy Songs II. Based on a 1890 cowboy poem by Larry Chittenden, certain lyrical changes have taken place. For instance, the first line was altered from "Way out in Western Texas, where the Clear Fork's waters flow" to "Way out in Old Nevada, where the Truckee's waters flow."

It's a rip-roaring cut, a stirring mix of wild west movie scores, pop-country, Bruce Springsteen channeling Phil Spector, along with seasonally appropriate jingle-jangle. What's not to like?

The release of The Cowboy's Christmas Ball coincides with World AIDS Day, with the proceeds from the sale of the track going to (RED), a campaign that works with HIV/AIDS patients in Africa.