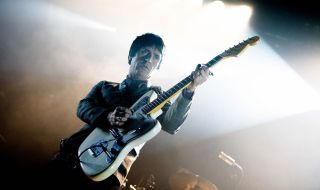 Guitar hero Johnny Marr has revealed that he's planning to write an autobiography and that he's already made an agreement with a publisher for the rights to the book.

Speaking in an interview with US blog Brooklyn Vegan, Marr was asked if he had any plans to pen an autobiography and replied, "There is gonna be one, yeah. I've had so many offers and so many people advising me that my story is worth it, but I understand it's something that I have to do."

Details are still vague, but Marr did go on to reveal a ball-park timeframe, telling writer Jonathan Dick, "I'll do it in the next couple of years… I want it to be so thorough that I don't make a record or tour whilst I was doing it. It is gonna happen, and I've already made an agreement with a publisher for it, so I will get it done."

Former band-mate Morrissey recently published his own autobiography, amusingly insisting it was published via Penguin Classics - a joke at the expense of the literary world. The book has since become one of the fastest-selling autobiography's ever, beating first-week sales of Keith Richards' Life.