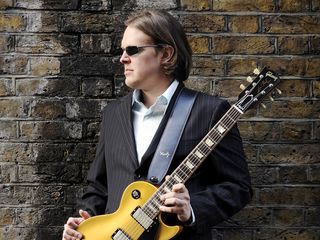 Joe gives it up for Hendrix

Since the age of 12, Joe Bonamassa has been playing the blues alongside such greats as BB King, Buddy Guy, just to name a few. Obviously, he knows a thing or two about a thing or two.

During a recent interview for an upcoming MusicRadar podcast, Bonamassa discussed the impact that Jimi Hendrix had on the music world as a whole and himself. "I don't think there's any music that you hear on the radio today that would be possible without Jimi Hendrix," Bonamassa says.

"Rock, blues-rock, heavy metal, any guitar stuff when you get right down to it - Jimi did it. He's certainly the guy who basically invented the blues-rock genre for guitar players.

"True, you could argue that Eric Clapton did it, and I love Eric Clapton like crazy, but Hendrix took it to the masses in a way that was unprecedented. And if you're a Fender guy, Jimi's your man.

"The one area where I'll say that Hendrix is underrated was his ability to use chord melodies. He used different inversions of chords and was able to make a three-piece band sound absolutely huge. From the moment Hendrix and the Experience came on the scene, power trios had their work cut out for them."

"If I had to pick a favorite record of his, it would be Axis: Bold As Love. It had his best writing, his best playing, it was very adventurous. It wasn't so much about the flash, but there were so many subtleties, so much creativity on that album. It's really beautiful."

It's all in the hands

"Jimi Hendrix is a classic example of a player in which everything he did, it was all in his hands. I know people think it was about his early effects and stuff like that, but I have pictures of him where he's playing Les Pauls and Jazzmasters and Flying Vs and he's plugged straight into an amp. I wasn't at the concerts, obviously, but I bet you in every case, what came out of those amps sounded like Jimi Hendrix. That, to me, is a consumate musician."

In the coming weeks, look for the full MusicRadar Joe Bonamassa podcast interview.