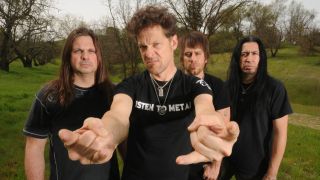 After he left Metallica by his own volition in 2001, bassist Jason Newsted threw himself into a variety of musical projects - Echobrain, Voivod, stints with Ozzy Osbourne's band and Gov't Mule - but he says that it's only recently that he's been able to adjust to normal life from his 15 years with the metal behemoths.

"Metallica was quite a ride," Newsted says. "It took me 12 years to come down from the band. I just came down last year. I was spun out for that long before I actually got my feet back on the ground and felt good about doing this thing again."

Now that he's found his footing once again, the Rock And Roll Hall Of Fame inductee and six-time Grammy winner is pursuing the ultimate in heaviness with his own outfit, the inventively named group Newsted, in which he sings lead and plays bass. On the dramatically surpercharged and compelling four-song EP, Metal, Newsted is joined by guitarist Jessie Farnsworh and drummer Jesus Mendez Jr.

The band recently added former Staind guitarist Mike Mushok to the lineup, and a full-band album will be released by the end of the year. "I couldn't be happier with how the EP turned out," says Newsted, "but I really can't wait for everybody to hear what we're doing on the album. There's some spots where I'm like, 'Whhhhat the heck?' Between Jessie's AC/DC-like rock 'n' roll guitar playing and Mike's full-shred mode, it's a multidimensional thing that's going to blow people's minds."

Newsted spoke to MusicRadar about how the new band came together, his extra-curricular activities over the years, his favorite drummers and whether fans can expect to hear any Metallica songs during Newsted shows.

So the band is called Newsted. What - you couldn't think of a better name?

[Laughs] "No, I couldn't. That's the best name. Is there a better name? Let's see… Black Sabbath is better, but that's about it. I've been in lots of cool bands with lots of cool names. This one had to be like this. It's a global thing, a global appeal; it's what's Metallica has worked on for 30 years, and I was there for 15 of those years.

"Because I've played so many different styles over time with Gov't Mule and Voivod and Echobrain, all of this crazy music, I needed to make sure that there was no confusion as to what this is. That's why I called the EP 'Metal' and the name of the band is Newsted. I've worked a long time to have my name mean something, so I may as well use it.

"This is the first time since Flotsum that I started a band from fresh. I'm singing, it's my songs, my voice, my lyrics - because of all that, it's got to be my name. I didn't want to people to have to spend a whole lot of time figuring things out."

"We're gonna crush it," Newsted says of his band's live shows. "People are going to get purity from us." © Fran Strine

Were you looking to form a band for a while? It seems as though you've had a great time just playing in other people's groups.

"I get a lot of cool offers - always, but especially since leaving Metallica. A lot of heroes call me, and I can't say no to them. I've played with Ozzy, played with Tony Iommi. The only answer I give them when they call is 'What time do you want me to be there?' I feel pretty blessed."

In Metallica, you worked with producer Bob Rock, who isn't known for banging things out quickly. I would imagine that recording the Metal EP was the opposite of, say, the "Black Album."

"That's correct. We did the EP in a week - in six days, actually. We'd go in, set up the mics, and then we'd blast. That's what you get - warts and all, man. There's imperfections and all kinds of tuning crap, but it's fine. That's not what this deal is; it's about impact and purity.

"I've already been to that place that you mentioned. I've already done those things, and it is a challenge. To be able to get that meticulous and to make things sound perfect, that's a very serious level of artistry. When you spend that much time on something, you usually do get those results.

The Black Album is the biggest SoundScan album of all time, so the proof is in the pudding. But the live thing that we do with this band, you get what you get. It's the same exact thing as when you come to see us live, except we play it right in front of you."

What kind of demos did you record for the EP? Were they elaborate and very plotted-out, or were they loose sketches?

"I got my first computer last year. I have GarageBand on there, and I have my guitar, so basically, those are the tools. Since last year, I've written 21 songs, and each one I put on the computer with all the instruments - guitar, bass, drum machine. Then I share the songs with Jesus and Jessie and now Mike. I give them most pieces of what's on GarageBand, and they put their artistry on it. The stuff comes back, and it becomes what you're hearing on the EP and what you'll be hearing with the album. The initial seeds are all mine, but those guys put all the colors in."

How did you find the guys in the band?

"I was introduced to Jesus probably about 15 years ago. He did some local road crew moving-around-gear-stuff work for Metallica back in the day, and then he became the drum tech on the Echobrain tour. We got to be buds. Around 2003, he started coming to my studio, the Chophouse, as an instrumentalist; we'd jam our improves and slabs or metal and stuff like that. It was cool.

"Jesus brought in Jessie about five years ago, so the trio that created the Metal EP has been together since that time. Last year, we started putting the nose to the stone, you know, honing it in and getting it together for real. We've got a few years under our belts, learning each other's chemistry and our playing styles and things like that.

"Then, about seven weeks ago, Mike Mushok auditioned for us. We had a few auditions with some very capable players; there were a couple of people in the on-deck/standby circle that wanted to come and play. But once Mike was here, they… didn't get to come and play. [Laughs]

"Actually, I knew that Mike was the guy even before we started playing. He's a very cool cat. We have the same sense of humor and a clean-headed, clear-eyed professional vibe. I'm not afraid to have a couple of brews when the time comes but not when we're playing. It's a very pro situation.

"Mike has added a new dimension to the band. I never listened to much Staind, so I was unaware of their heavy element. Mike brings the heaviness to the band - he's got that seven-string guitar and that baritone guitar. I feel very blessed to have him in the band. In the seven weeks that we've had him, we've completed the album - 15 songs. We'll put out a full hour for the people pretty soon."

Well, it's pretty clear that you're happy with how things are working out.

"Absolutely. I do push very hard in the studio but not dickishly so. I'm just professional, and these cats are all that. They're hard workers - that's what I was looking for.

Do you give Jessie a lot of direction for what you want him to play? Is there a set way you guys work at this point?

"All of the songs are mine from the get-go. All of the ones you hear on the EP and everything you're going to hear on the LP are my skeletons, my initial seeds - all the riffs are mine. I give the guys the demos, they learn my riffs, and then they play guitar in the studio. So I'm planting the seeds, and then I wait for them to bring the fruit.

"Actually, on the recording of Soldierhead, that's me playing guitar. Jessie plays the leads, but I'm doing rhythm. On the LP, everybody came in and did full parts. I'm just playing bass. The EP was very much a testing of the waters."

The main guitar riff for Soldierhead is somewhat reminiscent of Metallica. Do you hear that, too, or is it just me?

And Godsnake, lyrically, has a bit of a Don't Tread On Me vibe. You're not afraid to reference your past.

"But I try to be wide-eyed and sponge-like with everybody I play with - guys like Zakk Wylde and Warren Haynes. When you're lucky enough to be with players like that, you should soak it up and spit it back out."

"I'm an old-school metal guy. At the end of the day, that's what I am - even though I've listened to a lot of different styles of music and I've played a lot of styles. It's always going to come out a certain way with me, and that's fine. I not ashamed of any part of my history, my biography, and I'm happy to spread 'em around. Everybody regurgitates, and that's all I'm doing."

Talk to me about your playing with Gov't Mule. Of all the stints on your resume, that one is a little surprising.

"Warren called me up to jam when they were doing the Deepest End thing, right after they lost [Allen] Woody. They were looking bass players to kind of fill his shoes, and it literally took 24 bassists at a time. For real - literally. He was very special. So that's how it all started.

"I did some live shows with them, did some recording - it was a whole different facet. I'm very much a jam-oriented kind of cat myself; I've spent hours doing improvisational music. Hour-for-hour, I've spent more time doing that than anything else. Going in and jumping into the jam situation felt natural to me, but I had to be on my Ps and Qs because of the caliber of players.

"And I'll say this: Matt Abts from Gov't Mule is one of the most underrated drummers in the history of time. I've played with some of the craziest, sickest drummers, and he's definitely in top five or six."

Who would be some of the others on that list?

Hearing how jazzed you are about the recording you've done with these guys, I imagine you're itching to take them on the road.

"Oh, yeah. We're gonna crush it. People are going to get purity from us. A genuine rock 'n' roll, punk, old-school, thrash-metal ethic is what it comes down to. It's not too many frills right now, not a grand production, but that's all right. We let the music do the talking - that's it."

Do you plan to play any Metallica songs?

"Hey, man… hey, man… [Laughs] You know, there's there been two lead vocalists in Metallica in the 32-year history of the band: there's a guy named James Hetfield, and there's a guy named me. I only sang three or four songs, but the videos have kept me alive in people's eyes. I will touch upon the songs I am famous for from the bands I'm famous for."

For more info on Newsted, including tour dates, visit the band's official website.