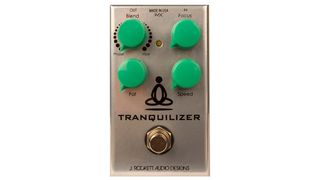 J Rockett Audio Designs - perhaps best known for its Archer Klon-a-like - has announced the latest in its line of Tour Series pedals, which feature input from Nashville and LA touring artists: the Tranquilizer Phase/Vibe.

Despite starting out as a Phase 45 emulation, the Tranquilizer quickly took on a life of its own, as Rockett's scientists added uni-vibe, Leslie and vibe-only sounds to its feature set.

A focus control is key to the pedal's versatility, as it biases the phase tone to control low-end 'whomp'; blend, fat and speed knobs further adjust the sound.

The J Rockett Audio Designs Tranquilizer is available now for $199.