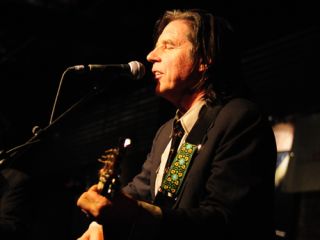 Before making his luminous new album, Keeper, John Doe found himself in a curious dilemma: He was happy and content, experiencing sustained inner peace for the first time in years - and it was wreaking havoc on his songwriting.

"I would wake up and be in a good mood, and then I'd think, 'Shit, what do I write about?'" he says with a laugh. Peace of mind and satisfaction are great for the soul, but they don't always lend themselves easily to songwriting, not unless you want to write something cheesy and wimpy. But if you want substance, you have to work at it a bit."

Substance has never been a problem for Doe. As one of the founding members of the seminal LA punk band X, and throughout his notable solo career and side projects, he's amassed a catalogue of emotionally charged songs that, more often than not, explore the dark side of human relationships.

Keeper, a winning, evocative mix of Americana, is a lyrical change-up for Doe, and he admits that he had to take the time to let the songs come to him. "It wasn't always about me digging through my soul and my issues," he says. "If I was feeling love or seeing something that made me happy, even if it was just the smallest of ideas, I tried to build on that. It's an optimistic record, but there's still an edge to it. It's still me."

Dave Way produced Keeper. The two of you have worked together for a while now.

"Dave is my benefactor in many ways. We record stuff, and we keep going until it's right. He doesn't charge me until I have something I like. He's got a great home studio, and he's fairly well-off, so I pay him a third of my budget when we're done and everybody's happy.

"We did things a little differently this time: We recorded in a proper studio outside of his house. All of these incredible players came in, and as they did their thing in the studio, I was in the control room doing my singing and playing. Half of the vocals resulted from those sessions. It was like a real record." [laughs]

Musically, the album has a late '60s/early '70s feel. There's a Stones vibe from that era on many tracks.

"It just went that way. I didn't do what some people do where it's like, 'I love this record, so I'm going to make my record sound just like it.' That's really...dumb. [laughs] But I will admit, yes, that when some of the songs on this album leaned in a certain direction, I didn't run the other way.

"As a teenager, I found incredible inspiration from music of that era. Everyone from George Harrison to The Band to The Rolling Stones - I guess that would be post-pyschedelic rock. That's the time when I really learned how to play bass and write songs. It's a balancing act of paying homage, but not trying to mimic."

Americana music is the underpinning of much of the record. You've always been a true student of the genre - did you listen to anything in particular before recording?

"Really, it would be some of the same records, which were the first wave of the hybrid of Americana. There's The Band, The Rolling Stones - their version of Americana, anyway. But I think influence is best when you don't notice it so much. It should be as invisible as possible."

Despite your strange problems with Keeper, on the whole, is songwriting a fun experience for you?

"Sometimes. And sometimes...not at all. [laughs] This record was difficult in that I had to let things go fallow for a while and not worry about it. I had to trust that the songs would come, and they did.

"Once you turn 40, you'd better learn how to find satisfaction and embrace the joys in life. If you don't, by the time you hit 50 and onwards, you're going to be a horrible, miserable person. I'm all about living the artistic life, but there's a big difference between an angry young man and angry old man. Who wants to be around an angry old guy?" [laughs]

You're both a musician and an actor. Have you ever noticed that musicians tend to do their greatest work in their youth, yet actors can blossom in their 40s, 50s and even later?

"Hmm…I think that's a pretty accurate generalization. I wish I understood why that happens. But see, that's the challenge, though, as a musician - to still have something to say later in life that isn't filled with anger or angst. It's a hard thing for a musician to find that fire in his work without getting too close to the edge personally. You don't want to destroy yourself just to have compelling material, although many have done it.

"Acting is different. It's all about experience and relaxing and…fronting. [laughs] You get to pretend to be a different person. If you pretend to be confident or calm and collected, then you'll look like you are."

Let's talk about some of the songs on Keeper. Never Enough - are you writing to somebody in particular, or is this a comment on society?

"A little bit of both. I don't watch a lot of television, but I got sucked into this terrible show called Horders, which is about people whose lives are on the brink because they can't throw anything out. So I did do a sad comment on society, but I directed it at other things, like religious fanaticism. And then there's the pathetic state of affairs with capitalism. Yeah, it's all in there."

Little Tiger comes off as being almost a children's song.

"Well, it started out as being about someone I'm totally in love with, and then it ended by being about my three daughters, who I'm also in love with. I was playing around with he idea of a person or an animal…or a tiger. The idea that it could be a children's song is great to me. Nothing better than a kid bouncing on a bed."

"Huh…Well, that's a different take on it. Good on you! [laughs] That song relates to a relationship, and there's advice in it. If things aren't working out in a relationship, take a step back from that other person, and that'll give them a chance to step forward. As I was writing it, it got thrown into this mix of past lives and muddy roads. Maybe that's the storytelling aspect you hear in it. That's what happens when you write, and you have to learn to not fight it and just go with it."

Moonbeam has a classic '50s vibe. There's a little bit of I Only Have Eyes For You going on.

Yes, Painting The Town Blue is an X song.

"Right. But Moonbeam was written by a guy named Danny White. He's a New Orleans singer. My girlfriend heard the song on YouTube and she played it for me. You should listen to his version - it's even cooler than mine."

Throughout the record, you're teamed with various female artists. Do you feel as though your voice just naturally lends itself to being balanced with a woman's?

"Yep. [laughs] Sure. Obviously, I've sung a lot with Exene, and I learned a lot from her. She and I grew up singing together and really developed a vocal relationship, one of giving and taking, doing a back-and-forth thing.

"You can imagine my joy when Patty Griffin said, 'I love these songs. Sure, I'll sing with you.' Pretty incredible. And then there's Jill Sobule and Cindy Wasserman. We all do kind of a dual-lead vocal in many ways. I love singing with women. What can be better?" [laughs]

X opening up for Pearl Jam in South America - how did that come about?

"Eddie Vedder's always been a big supporter. We opened up for Pearl Jam back in 1999 or 2000, something like four shows in California. They were great. They're a band that talks the talk and walks the walk, and a long time ago they got something from X, and they decided to give a little bit back."

What is the status of X? Are you working on a new record?

"No. No, unfortunately. Exene and I will always write songs together, but as far as doing another X record, I don't see it happening. It takes so long to do. Maybe the songs we write aren't geared for a full X album. I don't know. We'll probably do a few songs for various things, like movie soundtracks. Anyway, we'll still be around. We'll be playing and singing, and folks will see a lot of us."