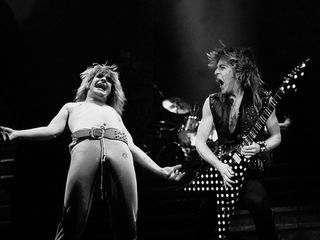 Guitarist Randy Rhoads, on stage with Ozzy Osbourne in 1982, perished 30 years ago this month. © Epic/Legacy

When Randy Rhoads died in a plane crash on 19 March 1982, the guitarist was just 25 years old and had recorded only two albums with Ozzy Osbourne: Blizzard Of Ozz from 1980 and 1981's Diary Of A Madman.

Despite his tragically brief career, Rhoads' playing - full of pulse and drive and bursting with game-changing creativity - took hold of scores of guitarists across the globe. Tom Morello counts himself as one of them. The Rage Against The Machine star, who now leads Street Sweeper Social Club and performs solo as The Nightwatchman, cites Rhoads as a major influence.

"He's the greatest hard rock guitar player of all time," says Morello, who named his first son Rhoads in tribute to the musician who fired his imagination three decades ago.

With the 30th anniversary of Randy Rhoads' passing upon us, MusicRadar sat down with Tom Morello to talk about the impact the late guitarist had on a budding young shredder in Libertyville, Illinois.

Do you recall the first time you heard Randy Rhoads?

"Sure. I remember the exact moment. I was packed in the back of somebody's mom's hatchback in Libertyville. The radio was turned to The Loop in Chicago, and this song called Crazy Train by Ozzy Osbourne came on. The other people in the car were more New Wave fans, and they were talking over it, but suddenly I was yelling, 'Everybody, shut up! What is that?'

"This blistering riff came at me, followed by an incredible solo, and of course, there was Ozzy - I recognized his voice as the guy from Black Sabbath - and by the end of it, I was like, 'What just happened?' There was no 'interweb' at the time, so I had to wait for the next Circus magazine to explain to me what it was. And then I ran out and bought the Blizzard Of Ozz cassette."

Did Randy spark your interest in playing the guitar?

"I had already started playing, but it was right around the same time. I was big fan of punk rock and the whole Do It Yourself ethic, so for a guitar player to come along and rekindle the spirit and reset the bar for hard rock guitar players was a pretty big deal."

"See, I was never a big fan of the whole 'party-hard-we're-gonna-rock-harder' world. I liked music. But I could see myself in Randy, how he was a real student of music. The fact that he practiced for hours on end really appealed to me. He was serious, and he wanted only to get better at his craft. When I was practicing eight hours a day, his was the poster I had on my wall."

"Almost immediately after hearing him for the first time, he became my favorite guitar player. I remember buying Diary Of A Madman when it came out, and somebody at the record store was making fun of me because of the album cover. I had to explain to this person that, while I certainly liked Ozzy, I was really a big Randy Rhoads fan - that's why I was buying the record. It was like, 'Well, the guitar player doesn't have raspberry jelly coming out of his mouth… ' Randy was a serious, you know?"

Were you practicing Randy's licks at this point?

"By the time Randy had passed, I don't think that I had the ability to play his songs, no. That came later. But I did spend about nine months learning the song Diary Of A Madman. For any guitar player, it's challenging. But for a beginning player, that's a massive, Herculean undertaking."

What else was it about Randy that drew you in? And why him? Obviously, there were other guitar players you could have gravitated to.

"There's a few reasons. There was the music, which was extremely heavy but completely musical. It wasn't like prog-for-prog's sake. His riffs and arrangements were head and shoulders above anybody else in the genre.

"And then comes his solos, on which, along with his rhythm playing, he distances himself from everybody. He combines technique - which doesn't really matter at all - with a tremendous sense of melody and harmony. Those things can only get you so far, too, but he had so much passion and feeling, yet he would still play these ripping solos and take your head off.

"The guy wasn't just a great guitar player - he could fucking jam! If you listen to the live stuff, where he does subtle variations of the solos you're familiar with, he's unbelievable, totally without peer. To me, he's the greatest hard rock guitar player of all time."

Do you remember how you heard about his death?

"I don't recall where I was or how I heard it, but I do remember being absolutely torn apart. It was so tragic. In a way, Randy Rhoads is the Robert Johnson of metal. It's such a small catalogue of stuff that has been so incredibly influential, and then to have died under such bizarre circumstances. And he wasn't even at the height of his fame, he was still on the way up. So you're left with the question: Had he lived, what more would he have done?"

How would you say that Randy has informed your work?

"One thing I can point to is the countless hours that I spent on technique. Now, you might not hear Randy's influence in the cow and duck noises that I sometimes make with the guitar, but what got me to that point was being serious about the instrument.

"I spent time learning the Mr Crowley solo, so I developed the ability to play notes at that speed, which I certainly didn't overuse in Rage Against The Machine - maybe a little bit in Audioslave. [laughs]

"What's interesting is, when I stopped trying to sound like Randy Rhoads and realized that what I loved about him was that he had a sound that was completely unique and was a representation of him as an artist, that's what inspired me to find my own unique voice as an artist. So I attribute it all to him."