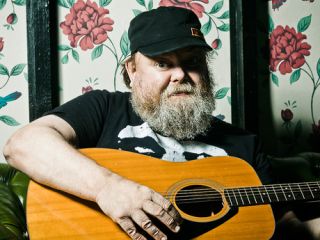 Thanks to the power of YouTube, The Treeman (pictured with unsmashed guitar) is a sensation.

Although not as memorable or prestigious as "The King Of Rock And Roll," or "The Hardest Working Man In Show Business," the title John Ryan proudly holds is still pretty snappy. "I'm 'The Angriest Guitar Player In The World,'" says Ryan aka The Treeman. "It's all in fun, so I'm OK with folks calling me that."

In truth, he's got little choice in the matter. In The Angriest Guitar Player In The World, a riotous video that has racked up over 300,000 views since it premiered last summer, The Treeman made an indelible impression, throwing obscenity-laced hissy fits while kicking and smashing guitars in frustration after repeated attempts to nail the opening to one of his original songs, Ghost Of Love.

"I was having a bad day," says the 49-year-old Treeman of the video that has made him an Internet star. "My picking wasn't what it should have been, and I was getting fed up with myself. Ghost Of Love is very important to me, and I had to get everything perfect. I guess people responded to my intensity."

The Liverpool-based Treeman admits that he's a late bloomer on the guitar (he didn't start playing until well into his 20s), but he's making up for lost time. Last year he recorded a handful of songs that he's looking to release - spruced up with new takes and overdubs - as a seven-inch single in the coming months. He calls his music "folk-Wave," likening it to early Dylan meets Talking Heads. "I don't fit into one category," he says. "I just write what I feel and hope it's good. Of course, the video has been a big help. People are hearing my songs and finding out about me. I can't complain about that. "

Even though you didn't play the guitar as a kid, were you always into music?

"Of course. I loved the great writers who played the guitar. Bob Dylan, Lou Reed - that's what I'm after, you know? Later on, I listened to a lot of Shane MacGowan. The Pogues are an incredible band.

"As to how I got started, I remember I was with somebody who wanted to put a band together. It seemed like a pretty good idea at the time, so I got myself an electric. That was it, then - I was in a band. We played some gigs around town and had fun. Nothing ever came from it, though.

"I moved over to bass, and then I switched to the acoustic, which I really loved. The acoustic fits me and my songs perfectly. I only picked it up again last year, after a 15-year gap. That's a pretty long time to not play, but I've managed to regain what I learned. I put some songs together, and now here I am."

Why did you not play for so long? What were you doing all those years?

"It's hard to say. I moved around from place to place. I wasn't making any music; I was just buying lots and lots of records. I don't know why I stopped playing - I just lost all interest. It went out of me in an instant; all my passion was gone. But as I said, I got back into it last year, and I'm very happy that I did."

Was there any defining moment when you realized you should play again? Did any particular artists inspire you?

Daniel Johnston has been diagnosed as schizophrenic and manic-depressive. What are your issues?

"I've got OCD, which is Obsessive Compulsive Disorder. Daniel has it, as well, so we've got that in common. I get very wrapped up in trying to know every chord and note on the guitar and to play perfectly at all times. When I make a mistake, I lose it and go completely insane. I've gone through about five guitars from losing my temper.

"So there it is, then. I've got anger issues. I really need to try anger management to keep a lid on things. I can't be losing it all the time. But you know, it's only because of my passion that I get so angry. I get mad because I have passion. I want things to be just right."

Whose idea was it to do the video? And who thought of calling it The Angriest Guitar Player In The World?

"When I was playing and messing up, I was being filmed by Dean, my agent. I didn't know what he was doing; I was just trying to concentrate on the music. Dean looked at the video and thought it was a great thing to put on YouTube. He thought a lot of people would tune into it.

"As it turned out, he was right. We had a pretty lousy year - all kinds of bad things happening - and people needed something to make them feel good. I heard from one fellow who said that he never, ever laughed so hard. The video inspired him. Now he wants to do things and get on with his life - all because of watching me trying so hard."

You must be pretty blown away at the popularity of the video.

"Oh, definitely! I didn't think it would spread so fast. I never dreamed I'd get so many viewers and fans and people liking what I do from just one video. The whole thing exploded into a phenomenon. I walk down the street and people want to have their pictures taken with me. I'm a celebrity now." [laughs]

When you play live, do you get angry with yourself? You don't freak out like in the clip, do you?

"I've only been doing open-mic kind of shows. I haven't done big, proper gigs yet - that'll come later in the year. I'm hoping to get abroad and do some touring, too. Occasionally, I'll curse at myself when I play live, but I try not to let the frustration show."

His eyes wide with concentration, The Treeman lays down a take for his upcoming single. © Carlin@urbansubrosa

Even though the video attracted a lot of viewers, do you worry that it might send the wrong kind of message? Are you concerned that people might think you're unbalanced?

"No, not at all. Definitely not. People really like the video. They can tell that I'm trying to finish my songs, and they can log onto the bandcamp site to see that I did get through everything. My songs are done, and they'll be featured on a seven-inch single. I have to complete some things, though - a few bits here and there, and some bass parts."

What's your main guitar? And how many did you go through during the course of the video?

"I've got a Yamaha acoustic at the moment, but it's pretty beat-up. I've gone through five other guitars in the last year. I think I smashed three in the video. I feel as though I've gotten through the pain barrier and now I'm at the other side. I have my songs honed, and I can play them properly. In the end, it's been worth it."

Guitars aren't cheap. How can you afford to smash them up like Pete Townshend?

"I can't afford it! [laughs] I need to stop doing it 'cause it's wasting all of my money. I'm open to an endorsement deal. I'm hoping that's what'll happen."

Speaking of which, you do have an endorsement deal with Jägermeister. How did that come about?

"Dean brought it to my attention, and he worked out a deal with them. They sent me a cap and a belt, a few T-shirts…oh, and some stickers."