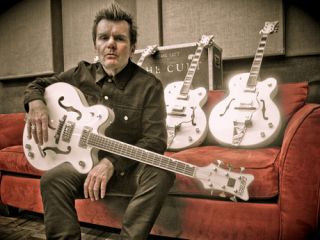 Billy Duffy, backstage with a few of his Gretsch beauties. On the couch, 1970s models; seated with a new moel 2011. © Michael Schulz

"We're winning!" crows Billy Duffy, guitarist for The Cult, echoing the now-infamous words of Charlie Sheen. But he's in on the joke, and he punches his statement with a laugh before turning serious. "OK, we're still in the game, we're still standing. In many ways, I think we've probably lived up to the prophecy of our name."

The release of She Sells Sanctuary from The Cult's 1985 album Love put the then-British-based band on the map. And nearly 30 years later, the song is still paying dividends - it was recently featured in a Super Bowl Budweiser ad. An omnipresent track such as this could be viewed as an albatross, but as Duffy sees it, "A big song is a big song. I'm certainly not going to complain. If we did something a while ago that people still love, that's a remarkable achievement."

On 22 May, The Cult are set to release Choice Of Weapon, their ninth studio effort and their first full-length album in five years. Co-produced by Chris Goss and Bob Rock, it's a strong, expansive set of psychedelic rock served up bold and brassy, led by the slamming first single Lucifer. "We like to hit people fast," says Duffy. "Nuances and finer points are in our music, but rock 'n' roll is still about getting to the point."

MusicRadar sat down with Billy Duffy recently to talk about the new album, his relationship with singer Ian Astbury and his ongoing love of Gretsch White Falcons.

How are you and Ian after all these years? Are things generally OK?

"There's been some roadblocks. We're both very stubborn people. But I think we've made more good decisions than bad. Ian and I got together and started writing songs back in 1983 - that's a long time. We've had a few hiatuses and hibernations, but we're still going."

"We're the head and the heart of The Cult. We each do things the other one can't. It doesn't matter who's in England, who's in the States, any of that thing. Geography never had any bearing on us, really, because we've always considered ourselves a global enterprise.

"Ian and I are English guys, so we have that sort of sensibility - we always will. But we never considered The Cult to be a typical teabag/bowler hats/umbrella band, if you know what I mean. As far as our own relationship goes and what we bring to the group, it's fine."

Let's talk about your approach to the guitar - in particular, your use of the Gretsch White Falcon.

"The Gretsch, absolutely. You know, I'm not a hoarder of guitars. I've got a few Gretsches, and they're all good, working guitars. I don't use them all the time, but I use them when I can. It's a pretty big thing, you know, the Gretsch - it's heavy. And we're working on a signature model, too, so that'll be something nice to look forward to."

You must have some pretty nice vintage models.

"Well, I have what I could afford back in the '80s, which was a 1970s Gretsch. I always liked the way that guitar felt. Gretsches were always expensive, even then, because they were imported into the UK from the US. Of course, I didn't have any special backing then, so as you can imagine, buying a guitar like that was a really big deal.

"In fact, back in '82, I bought a double cutaway that was stereo, which made it difficult to use - I had to get a stereo jack for it. Then I got a single cutaway mono version, and that's the one people have seen a lot. It was easier for me to handle, too. I didn't like the stereo guitar too much; I don't know what it was made for - some kind of country-jazz-fusion thing, I guess. But I wanted to rock, so the other one suited me fine."

Who was your inspiration for picking the White Falcon? Not many people automatically go for that kind of guitar.

"It was a long-term/short-term thing. Long-term, pre-punk rock, around 1976, I was playing in my high school band, and we were all into Neil Young and Ted Nugent. I went to see Nugent around this time in England. He was playing the big Byrdland and all that. So I was very impressed by the large, semi-acoustics. They were more exotic, even though I still liked Les Pauls - and a black Les Paul copy was my very first guitar.

"The Gretsch thing was just a search for a different sound, something unique. And what brought it into focus was when I went to see Bow Wow Wow. I kind of knew those guys a little bit, but seeing Matthew Ashman with that Gretsch… I was transfixed. I said, 'If I get any money, I'm buying a Gretsch.'

"Soon after, I got in the band Theatre Of Hate, and ironically, the singer played a Gretsch. He had an odd-green model, with the pickup by the neck - it was great. He asked me one day what kind of guitar I was going to play, and I said, 'Well, I've got a job now, don't I? I'm buying a Gretsch!' Took all my money and got the double cutaway.

"Gretsch's are great. They've got their sound, obviously, but there's the look - it's distinctive. You strap on a Gretsch, and you're saying something with how you look. The visual thing is very important in rock 'n' roll. A Gretsch is a fashion statement, as well as an instrument for sound."

They do look cool, but the sound is the thing.

"Without a doubt, and it's something I've really experimented with. I've tried to go for something… cinematic. I didn't want the surf thing or rockabilly, and I didn't even want to do Ennio Morricone - I wanted it to be psychedelic. It's a feeling I pursued, and I still am."

Amp-wise, what have you liked to pair the White Falcon with?

"The signature sound of the first two Cult albums was the Gretsch and a Roland JC120. That amp had a very nice, clean chorus sound. Looking at pictures of me live from around this time, I went for a double amp setup - there was always a valve amp to give everything some balls.

"Even though I considered a Marshall and a 4x12 to be very 'rock,' and almost a bit 'metal,' I tended to go with them. Fender Twins didn't have what I wanted, and Vox AC30s were a bit shrill for me. But I haven't had a lot of changes. In the '90s, I discovered Matchless amps, and they're really good."

Are you a bit surprised at the longevity of the Love album? She Sells Sanctuary is a gift that just keeps on giving.

"Yeah, I am surprised, but then… The song has a certain magic, and I have to confess that I never tire of playing it. It's uplifting, a real feel-good song you can get all caught up in. Ian and I never had a moment when we didn't want to play it. It's an easy, graceful song with a rolling energy. To tell you the truth, it almost plays itself!" [laughs]

You reference it somewhat on the new album. The song The Wolf has a similar kind of intro.

"Sure. We're very conscious of that - Ian, especially. There's a signature thing I do on the guitar, the droning, repetitive chordal bit. It's a cool thing, and you can do endless combinations or variations of it. A lot of our songs have that - Fire Woman, Rain, Rise… there's quite a few."

It's similar to what The Edge did on some of U2's earlier songs.

"Yeah, yeah, it is. But he was always a picking-minor-chords kind of guy. With The Cult, it's more of a driving thing. We're all from the same punk era, you know. All any of us did was say, 'How the fuck do you follow the Sex Pistols?'" [laughs]

You're not known for taking big guitar solos, but you do have a few on the new album. Death and Amnesia have some nice lead breaks.

"Yeah, there's a few. I'm not a big solo guy. I go in and just wing them. The guitarists from the era I came from weren't into solos, and I'm probably the best soloist of the bunch. That's not to say it's my thing, 'cause it's not. I like melodic interpretations, like Roxy Music and Bowie - although Mick Ronson was a massive soloist.

"But you know what I mean - I never wanted to practice guitar solos. It always seemed like a kid practicing the violin. I always thought that there were more exciting things to do, people to meet and all that."

What was it like working with Bob Rock on the new album? The band has a history with him…

"Bob is great. We've done four albums with him, and he really 'gets' us. Ian is always trying to bring different elements into The Cult, and he got Chris Goss to be involved. They've worked together in the past. And all credit to Chris, he did a lot of heavy lifting on this album. But Bob came in and really finished things. That's what he was: The Finisher. He'd come in when we were floundering, and he knew just what to do.

"Bob is a real hook guy; he knows what the songs need to grab people. But he's also big picture. He'd listen to songs and go, 'Where's The Cult? Where's Ian and Billy?' He can zone in very quickly and see where we have to go."

The word 'comeback' is overused, but do you think it applies to this album?

"No, not at all. I'd never look to it like that. For us - and I do understand the Wide World Of Sports aspect to culture and all that - it's like we never went away. We might not make as many records as we used to, but it's only because we don't want to do anything until we're ready. I don't want to inflict mediocrity on Cult fans. Anybody with a cheap recording device and access to the Internet can do that.

"That's the problem nowadays: Anybody can do anything. Anybody can be a rock star - or at least they think they are. But just because you put stuff out there doesn't mean you have talent. It's just stuff, interference in the airwaves. With The Cult, we always felt that if we're going to take up people's oxygen, we might as well make it count.

"But if I can bring up my one peccadillo with the band, I think we don't follow things up as we should. We get going in the writing process, and we get recording, and then we don't follow it up quick enough. Having said that, I'm going to try to get Ian to agree that we should continue writing and working faster. The last album was 2007. This record isn't a comeback, but we could be around more. Sure, we could."