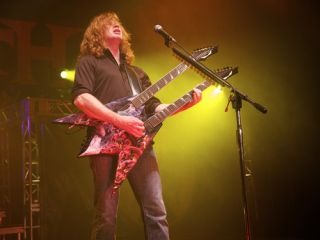 When we caught up with Megadeth frontman Dave Mustaine last December, the guitarist spoke at length about topics ranging from the band's astonishing new album TH1RT3EN, his renewed relationship with Metallica, songwriting, riffs and how he welcomed bassist Dave Ellefson back into the fold.

It was a jam-packed interview, but even so, when it was all over, there seemed to be much more to discuss - and when you have a raconteur as skilled as Mustaine, there's always the need for more. So we sat down with him again the other day during a break in the current Gigantour that Megadeth is headlining (the bill also includes Motorhead, Volbeat and Lacuna Coil).

This time, the talk focused mainly on Mustaine's connection to the guitar, but we were soon asking the politically savvy musician for his thoughts on the coming US presidential election, as well as his opinion of today's musical climate. As always, Dave speaks his mind.

How would you say you've changed as a guitarist through the years?

"Well, I've learned to play the guitar three times now. The second time when my arm went numb [the result of falling asleep with his arm over a chair while recovering from pain medication dependence], and then there was the surgery I had last year."

"Right. I had to have my neck fused - the vertebrae in my neck - from the damage that headbanging has done over the years. It had degenerated the discs. When they were taking out one of the discs to replace it, they discovered a big bone fragment that had broken off and was pushing against my spinal column. It was very painful.

"I was laying in a hospital bed on 12 September, my birthday is 13 September, and the Big Four concert was supposed to be 14 September in New York. We sent messages to everybody that I had to get surgery and I couldn't make it.

"As this was happening, I heard some pretty horrible things that were said about me because I wasn't coming. The gutless coward who said these things shall remain nameless, but I know who he is. But still, I said to myself, 'I'll show you…' They got me wrapped up and put me in a brace, and I went to New York and played the show. There you go."

In having to learn how to play again, what have you discovered about the guitar?

"Sometimes, when I'm learning it again, I'll listen back to the old tracks to try to decipher what the solos were. It can be pretty eye-opening when I discover that I was playing something a little 'off.' It's kind of like a pilot flying a plane: if he's off even one degree at the beginning of a flight, he's going to wind up a long way from where he was supposed to land.

"The layman might not notice, but when I would listen back to live versions of solos, it was like, 'Wow! I am nowhere near what that should be.' So, as painful as it's been, I think my soloing has improved because of the work I've put in.

"Certainly with the numbness in my arm and hand, and the muscles atrophying in my fingers and arm and stuff, it forced me to make adjustments in how I played. The stuff that I couldn't play was put on kind of a waiting list, but as soon I could play it, we added it back into the set. Most of it was stuff I was having problems with before I had any injuries."

Injuries aside, what kinds of things can't you play on the guitar that you wish you could?

"It's not that I couldn't do them, I just flubbing them a little. There's a fill in one of the solo sections in Hangar 18, and there's a little part at the beginning of Head Crusher, and you know, there's a few really widespread riffs that I was doing, things that are stretched out over nine frets - that's a big area to fit your hand over. So when I was going back over and relearning them, I kept trying and trying. Now, I can play those parts better than ever before."

Do you get the same enjoyment from playing the guitar as you did when you were a teenager?

Wait a second... Are you joking about the acting?

"No. You see television shows or movies, and any time they have cameos by musicians, these people can't act to save their lives. I've done some cameos, and I've done a lot of live TV for news and so on. I'm comfortable in front of the camera. If it came down to it, if I could get a part that would benefit the band, sure, I'd take it."

Above video: Mustaine at the 1992 Democratic National Convention for MTV News.

Speaking of news, you were a correspondent for MTV during the 1992 presidential election. What's your take on US politics in 2012?

"I'm just hoping that whatever is in the White House next year is a Republican. I can't bear to watch what's happened to our great country. Everybody's got their head in the sand. Everybody in the industry is like, 'Oh, Obama's doing such a great job...' I don't think so. Not from what I see.

"Looking at the Republican candidates, I've got to tell you, I was floored the other day to see that Mitt Romney's five boys have a $100 million trust fund. Where does a guy make that much money? So there's some questions there. And watching Newt Gingrich, I was pretty excited for a while, but now he's just gone back to being that person that everybody said he was - that angry little man. I still like him, but I don't think I'd vote for him.

"Ron Paul… you know, I heard somebody say he was like insecticide - 98 percent of it's inert gases, but it's the two percent that's left that will kill you. What that means is that he'll make total sense for a while, and then he'll say something so way out that it negates everything else. I like the guy because he knows how to excite the youth of America and fill them in on some things. But when he says that we're like the Taliban… I'm sorry, Congressman Paul, but I'm nothing like the Taliban.

"Earlier in the election, I was completely oblivious as to who Rick Santorum was, but when the dude went home to be with his daughter when she was sick, that was very commendable. Also, just watching how he hasn't gotten into doing these horrible, horrible attack ads like Mitt Romney's done against Newt Gingrich, and then the volume at which Newt has gone back at Romney… You know, I think Santorum has some presidential qualities, and I'm hoping that if it does come down to it, we'll see a Republican in the White House... and that it's Rick Santorum."

Let's get back to music. Now that Dave Ellefson is back in the band, would you say this is the best lineup of Megadeth you've ever had?

"Well, it's hard to answer that without risking hurting somebody's feelings. I mean, you've got Nick [Menza] and you've got [Jimmy] DeGrasso… But you know, Shawn [Drover] is the kind of drummer we wish we'd had in the beginning. David Ellefson commented on that, too - that if we'd met Shawn in the beginning, there would never have been any other drummers.

"As far as having Dave back in the band, yeah, it's been great. I think his self-inflicted time out [laughs] has been really good for us. He's matured a lot. I keep joking with him: 'Man, the last eight years you must have been practicing your butt off, 'cause you've gotten so much better.' But it's true. And Chris Broderick is great. He has no problem playing Chris Polland's music. When Marty [Friedman] was in the band, it was all about Marty. We let Chris Broderick spread his wings in the studio, and he's amazing - incredibly versatile."

Pat Carney from The Black Keys caused quite a stir recently when he told Rolling Stone that rock 'n' roll is dying. Do you feel the same? What bugs you about rock these days?

"Rock isn't dead - it's just out of ideas. You've got a lot of people manufacturing music who aren't producers, and there's A&R guys who aren't A&R guys. When I started out in music, an A&R guy was like the fifth Beatle - he'd be there for you, and he'd help make the songs better. We don't have that now.

"If record companies were about breaking bands and selling records instead of just recouping costs, the music business would flourish again. It all comes down to our government and the taxations, what you can say and what you can't say. And then there's the outlets tightening up - MTV doesn't even play music anymore. I remember when I was a kid, you could put MTV on for days and it would be nothing but music.

"So, no, rock 'n' roll isn't dead, but the recording industry is like a bunch of bleached bones out in the desert - not a lot of life to it. I mean, when you have guys running record labels who are younger than I am? Come on…

"When I was coming up, there were guys like Irving Azoff and Ahmet Ertegun and Clive Davis and Jimmy Iovine. Those are the big wigs. I laughed my ass off the day I heard that Fred Durst had his own label. I thought that was silly. I mean, here's a guy who films his own sex tapes - and he's running a label? I would be ashamed to be on that label."