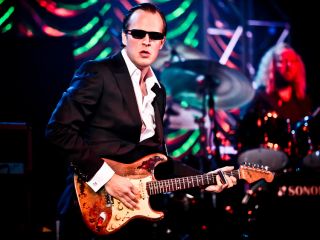 "To sell out London's Hammersmith Apollo is amazing," says Joe Bonamassa. "Selling it out for two nights? Even better. But to get to play Rory Gallagher's 1961 Stratocaster on my opening date? That's something I would have paid money for. Talk about a once-in-a-lifetime experience."

Bonamassa is still reeling over his London gig a couple of weeks ago, the first night of his two-date stand, when he played the Irish guitar hero's iconic Strat on stage. "And I have my girlfriend, Sandi Thom, to thank for it," he says.

As it turns out, Thom, a successful, UK-based singer-songwriter, is well acquainted with Donal and Dan Gallagher (Rory's brother and son, respectively), and she arranged for the treasured instrument to wind up in her boyfriend's hands.

"Sandi said to me one day, 'I'm going to give you your birthday present and your Christmas present all in one,' says Bonamassa. "So I'm thinking, OK, this is going to be pretty good, right? I had no idea that she would this off! She told me that she just spoke to Donal, and he was going to come to my London show…with the guitar! She said that if I wanted to play it, Donal would be happy to lend it to me. I was like, 'Are you kidding me?!'"

According to Bonamassa, the thought of being in the same room with Gallagher's Strat, much less holding it, was overwhelming. "My head was head was rushing," he says. "Rory played a bunch of guitars in his time, but the '61 is the guitar. There is no other. When it came out of the gig bag, I was floored. There I was, looking at a piece of history."

"I got to spend a couple of hours with it before I went on stage. I changed the strings - probably the second time the strings have been changed since Rory died - plugged it in and started to play."

Bonamassa says that his body chemistry changed profoundly within seconds of playing the Strat. "Immediately I was in 'Rory mode,'" he states. "The pinch harmonics, the feel of the neck...there was big 'Wow!' factor. The thing is, this was a great guitar. If it belonged to Jerry Abrams from Peoria, Illinois, it'd still be a fantastic Strat. But it was Rory's guitar. The contours, the heel, the fretboard…you could really feel that he'd played it and made it his own."

Bonamassa performed with the Strat for his three opening numbers - a version of Gallagher's Cradle Rock, the original tune When The Fire Hits The Sea and a blazing take on Gary Moore's Midnight Blues. "I could've played the Strat all night, but I had to switch to a Les Paul for my other songs," he says. "And then Bernie Marsden came by to sit in with me. Unreal! He brought the '59 Les Paul that he wrote Here I Go Again on. It was like a guitar collector's dream on stage."