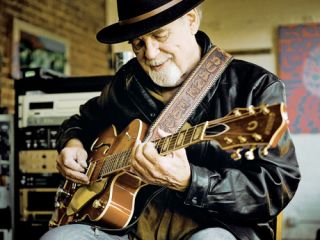 100 million-selling guitar icon of the 1950s and 60s, Duane Eddy, 74, toured the UK last month. In a wide-ranging interview, MusicRadar caught up with him ahead of his concert in the Hippodrome Circus in Great Yarmouth to talk about his gear, meeting The Beatles and his country roots.

How do you like to be styled these days? Guitar Man, Mr 'Twang'...?

You started playing at a young age, and got your first guitar at 16?

"No, earlier, most of my life I've played. Since I was 5 or 6, I was playing - a little lap-steel guitar, but it was mainly acoustic to start. My dad taught me three or four chords, and then I just listened to the radio and learned to play along with the songs, and that's how I built up what I did."

There's a Duane Eddy signature Gretsch guitar (the G6120 DE). How did your relationship with the firm start?

"When I was about 15 or 16 in Arizona, I went down to Ziggy's Music Store one day and he put a Chet Atkins Gretsch into my hands, a 6120. It felt so good, played just so sweetly. I fell in love!

"He wanted $65 for it, but I said I couldn't sign for that - my dad was away and I was underage for signing up big money - but he just let me have it, and Dad signed later. So that has always been my favourite guitar.

"And now Gretsch have made a Duane Eddy signature model 6120, an exact replica of that original, more or less. I'm thrilled about that, it's like having a new one all over."

And is that what you'd recommend a 15 year old guitarist to aspire to today?

"Absolutely. They took time to make the prototype, and they got it right. Mine had a faded tone and pickups, it's going to the Musical Instrument Museum in Arizona this year, the centenary of the state of Arizona - 100 Years of Arizona Music. The guitar is art and social history in culture.

"I'd also put longer pins on to hold the strings, as it could be a bitch to change strings, and they added that to the signature model. It's an eighth of an inch deeper. I prefer a medium gauge string, to get a bigger sound, I think. It's got a 'tru-arc' bridge.

"Now you can buy a Duane Eddy guitar and with all the modern technology, you can play. It's a working musician's guitar. I got the twang from trying out bass-heavy melodies with thumping vibrato and powerful reverb. It became my trademark sound."

What else would you advise a young musician today?

"Well, I wouldn't say how much practice you gotta do, I mean you got school work to do. But a couple of hours a day, listen to music, learn to play along. You gotta love the music, you gotta want to play so much it hurts, it's gotta be your passion."

Is it correct that you bought a 2000 gallon water storage tank to accentuate sound in your early recording?

"Yes, quite true. In Arizona at that time, working with Lee Hazelewood on Movin' and Groovin, there was no echo chamber. No such thing. So we went down the Salt River and came across these old storage tanks, with holes in that used to have pipes in and out. We found one that sounded right with the echoes and used that."

What gear do you use on stage nowadays?

" In concert, I use a pair of Fender twin amps with 15" speakers, I use the two together so I can turn the level down as I want. It's loud, but it's not deafening. You want people to hear the music.

"I like the MXR M159 Stereo Tremolo pedal, like the Dunlop one I used to have. My band on this tour are what is really Richard Hawley's band, from England, and they are some of the best musicians I have ever worked with."

How is it you have an English manager now, in Graham Wrench, of Electric Canyon Management?

"Well, I thought I was about done, you know? I figure every star has a five, six year window of success, and mine was 1958-63 time.

"I was just doing a lot of charity benefits and awards and I found I was in London picking up a MoJo Award, and got to see that Richard Hawley was playing Gretschs, which interested me. One thing led to another and I met his manager, Graham Wrench from Sheffield, and Graham said, 'I reckon there's more in you yet'.

"So here I am, on tour in the UK. We made an album in the fall of 2010 with no budget and no songs, so we gathered material and a couple of the band wrote songs for it. It's new directions, it's experimental in ways. Why, I even played Glastonbury - and that was something."

You have been honoured in many ways over the years. You have won Grammies and in 1960, New Musical Express readers voted you the World's Number 1 Musical Personality, ousting Elvis Presley. What sticks in the mind as a highlight?

Country music is very much part of your life as a rocker. Was it always?

"Yeah, country was the start. It's part of our history, folk culture. The country and western sound was strong around Phoenix, and it was on the radio and I listened and played along. When I met the DJ, Lee Hazlewood who gave me encouragement, country was just part of the total scene, including rock and roll."

You have worked with so many musicians over the years, playing, even producing some and you have influenced so many others. Tell us about some of them…

"The Beach Boys said I was influential on them and Movin' and Groovin' was part of the start of the surfing sound. I've produced Phil Everly and Waylon Jennings. I have sung with Willie Nelson. Bobby Darin, Clyde McPhatter. I met The Beatles, worked with John Fogerty, Springsteen, the Art of Noise… It's a lot over time."

You have a reputation for finding and nurturing talent and many have acknowledged what an inspiration you have been to them. Your 100 million record sales make you the best selling instrumentalist of all time, and with Chuck Berry you are credited with popularising electric rock guitar....

"My heroes when I was young were Gene Autry - 'The Singing Cowboy' - and westerns. Hank Williams was a mentor to me, not knowingly, but I learned so much from him. And what I picked up from his whole generation of country artists is to get your own style and do it with authority, let that style be part of your playing, and you soon build a following based on that.

"I try to encourage others to work like that, and if people learn from my playing, that's great."

Why do you think it is that most of the best known guitarists are men?

"I don't rightly know, but there are a lot of women who play guitar and there is no reason why it should be only men. Jennifer Batten, Ann and Nancy Wilson, Anna Calvi in the UK... Especially in these days, women can rock like men. And so they should."

It's said that when the British invasion of pop groups into the USA came in the mid 1960s, that was what wiped you out commercially. Is that how you see it?

"No, not at all. We loved the British bands and learned so much from them. The Beatles and others just opened whole new doors for us, it was great. And even when they got into the hippie stuff, well, I like musical experimentation and liked that about those times. Not the drugs and that, you know, people are still affected by that time - they fried their brains and it shows today.

"But remember, that people like Dean Martin were having top ten hits in this time just as hippies were making music too. And he was no hippie! It's always been a mix."

You know that Johnnie Walker, the 1960s pirate radio DJ

"I pay tribute to that guy in my concert every night. He put his ass on the line to bring music to the kids that they wanted to hear, not like the BBC. He stood up to authority. He used Because They're Young as his theme tune for many years, and I dedicate that to him in the show every night."

Your Rebel Rouser was used in the movie Forrest Gump, and The Trembler was in Natural Born Killers. Are you comfortable with that?

"Oh yeah, sure. Rebel Rouser was also in Flipped. I mean Forrest Gump is about the passage of time, over the years and that tune fitted it well. It was mine and Lee Hazlewood's song, and he had connections with the people putting that movie together."

You were in a movie yourself, A Thunder of Drums and the TV one, Have Gun Will Travel. How did that work out, why didn't you do more?

"Oh I loved it, I had a lot of fun and I worked with Charles Bronson, Richard Chamberlain... but I didn't like the hours they keep, the early starts on the movie set. I am a night time performing man."

Road Trip is the appropriate title of your current album. Do you still like being on the road?

"Oh we are having a lot of fun and meeting some nice people. The audiences seem to love the old music and the new. And I have a guitar technician these days to help me change guitars during the gigs. And Deed and I are having a ball. Next year, we celebrate 40 years of marriage."

And that sounds right for somebody who has been part of the musical fabric for so many years. Why, if Englebert Humperdink at 76 can represent Britain in the Eurovision Song Contest...

"Nice guy, we met him many times in the years. Why not? Why should he give up? He wants to sing. I want to play guitar."

Did you never want to put vocals on your instrumentals?

I can sing harmonies, but I'm not a singer. No, I'm the guitar man.