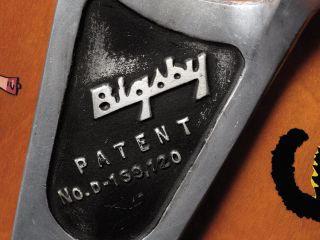 It's been 60 years since a motorcycle mechanic turned guitar builder called Paul A Bigsby designed the world's first truly workable vibrato unit. It was invented thanks to a remark by country and western guitarist Merle Travis.

After Merle's struggles with the notoriously unreliable Kauffman Vibrola vibrato that was bolted to his Gibson L-10 archtop, Paul Bigsby's loyal customer and friend challenged the luthier to "build a vibrato contraption that works". Travis duly took delivery of the world's first Bigsby True Vibrato unit in 1951.

Sand cast from an aluminium alloy, the Bigsby Vibrato is an ingeniously simple design. The strings are anchored to six small pins spaced evenly along a rolling cam, which is then manipulated with a flat, spring-loaded vibrato arm to lower or raise the pitch of the strings by half a tone.

A half tone either way won't cut much ice with Floyd Rose disciples, and a Bigsby can't hope to compete with the pitch lowering of the Synchronized Tremolo on a Fender Stratocaster. Yet the Bigsby still has an ace up its sleeve: while you have to rout out chunks of tonewood to install a Strat vibrato or a locking Floyd, no extreme woodworking is needed to fit a Bigsby.

Indeed, the vibratos add mass to a guitar, which can enhance sustain and tone. You can mount one of the various Bigsbys on pretty much any guitar with just a few screws. The horseshoe-shaped Bigsby B5 works best for flat-top, solid-body guitars, such as the Gibson SG, Les Paul Junior and Fender Telecaster.

The B6 is favoured by Eddie Cochran and Brian Setzer on their Gretsch G6120 rockabilly machines, while the heavier, longer B7 is the go-to Bigsby for Les Paul Standard and Custom models.

Today, those seeking the gentle wavering of a Bigsby can choose between a number of models made in the US or the Far East. For many, the Bigsby still ranks as the best sounding and most beautiful vibrato ever made. It's the sound of subtle note dipping and chord sustaining, and when it comes to achieving the fluttering wobbles of rockabilly, nothing less than a Bigsby will do.

1956: The switch from fixed to swivel vibrato arms

1960: John Lennon installs a Bigsby on his Rickenbacker