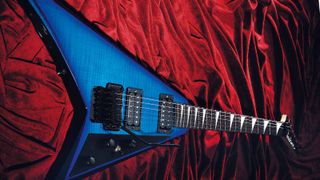 As well as cementing his name as one of the great metal guitarists of all time during his all-too-brief stint with Ozzy Osbourne, Randy Rhoads propelled Jackson guitars into the mainstream.

Rhoads dubbed it the Concorde, and it became the first guitar to bear Jackson´s name, thus launching the brand.

Jackson made several revisions to the original Randy Rhoads design before its release, most notably extending the guitar´s upper horn to differentiate it from the Flying V, but tragically, Randy was killed in a plane crash before the guitar was put into production.

The model has lived on in various guises, including the space-age Roswell Rhoads, with just about every big name in metal wielding one at some point - and, thanks to Randy, the same can be said for Grover Jackson´s guitars in general.

Randy Rhoads commissions Grover Jackson to build him a guitar

Randy passes away in a private plane crash in Florida, aged 25

The Jackson Randy Rhoads model is put into production