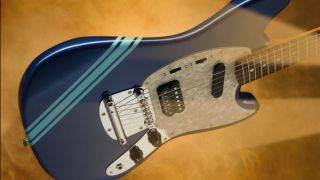 It may have been a 'starter' guitar, but no-one expected a racing-striped Mustang to start a revolution in the hands of Kurt Cobain in Nirvana's Smells Like Teen Spirit video.

Like 1956's Duo-Sonic, the Mustang had two single-coil pickups, but was the first student guitar to feature Fender's new floating vibrato, as well as three-position switches for each pickup, with on/off/ reverse-phase options.

After an eight-year absence, the Mustang returned in 1990, thanks to alt-rock heroes Sonic Youth and Mudhoney, and as of 2015, it's more alive than ever, with Mustang Special, Squier Vintage Modified, Kurt Cobain Signature, Modern Player and American Special models all launched in the past five years.

And with contemporary bands such as Warpaint, The 1975 and Peace all using 'em, this Mustang shows no signs of slowing down.

Fender launches the Mustang, with a short scale length aimed at beginners.

Fender reissues the Mustang - this time it's made in Japan.