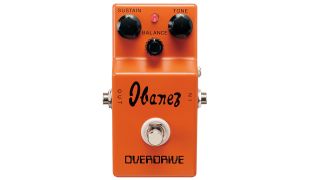 Ibanez has announced a reissue of its cult '70s effects pedal, the OD850 Overdrive.

Contrary to its name, the OD850 was actually best known for its fuzz tones, which recall EHX's Big Muff, as hinted towards by the sustain knob.

There's no word on the RRP for this one yet, but with originals going for anywhere from £300-£500 online, it's bound to be a more affordable option.