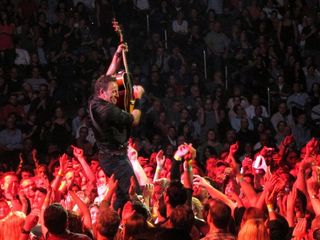 Supporting Soundgarden on the Friday (13 July) will be Southern rockers Black Stone Cherry, UK metallers Skindred and Welsh alt-rockers Kids In Glass Houses, who join Iggy and The Stooges and Cold Chisel for the hard rock bill.

Meanwhile, rising bluesman Gary Clark Jr (read our full Gary Clark Jr interview) will be appearing alongside Dawes, Amy McDonald and Jonathan Wilson on the Saturday (14 July), which will be headlined by Bruce Springsteen and also feature sets from John Fogerty (Creedence Clearwater Revival) and US country stars Lady Antebellum.

Check out the MusicRadar festival guide 2012 for the full rundown on this summer's best events, including key artists, locations and ticket prices.