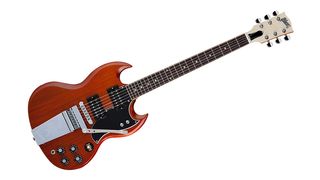 Gibson has unveiled its second new signature model of the day, this time in the form of the Gibson Frank Zappa Roxy SG.

The heavily modded SG is a replica of the guitar that Zappa used for live performances at the Roxgt Theatre in Hollywood, performances that were made famous after the Roxy & Elsewhere album and DVD release.

The SG features a slim '60s style neck, a pair of uncovered humbuckers and a Maestro-style vibrola, and is shipping with a retail price of $3749 (approximately £2410).

Frank Zappa has long been hailed as one of the most inventive rock guitarists ever to have graced the stage and studio. The live performances with his band The Mothers at the Roxy Theatre in Hollywood from December 1973 and after—documented in the album Roxy & Elsewhere and on subsequent DVD releases—are often considered to display the pinnacle of his unbridled invention.

The heavily modified SG Special used in those shows is an iconic instrument among Zappa fans, and now Gibson USA recreates that legendary SG in perfectly faithful detail to bring the Frank Zappa® “Roxy” SG to anyone seeking an extremely versatile, and superbly playable modified-vintage SG Standard.

Zappa´s original SG Special was an early ´60s model with a fast, slim neck profile and the smaller pickguard characteristic of the era, which would have been made with P-90 pickups originally. While it reflects the heavily modified state of FZ´s guitar, the Frank Zappa® “Roxy” SG still functions perfectly as a straight-up vintage-reissue SG when desired. But just flip either of the two mini-toggle switches to split the uncovered humbuckers´ coils, or to throw the pickups out of phase, and you leap into funky Zappa-certified tones—all aided by the highly functional Maestro-style vibrola with Lyre tailpiece. And with its natural neck and headstock, and a carefully color-matched rendition of FZ´s faded nitrocellulose Cherry finish, the Frank Zappa® “Roxy” SG looks every bit as distinctive as it sounds.

The Frank Zappa® “Roxy” SG begins with the same time-tested tonewoods that helped to make the SG Standard legendary in the first place. The body is crafted from solid Grade-A mahogany in the iconic double-horned style with beveled edges for enhanced playing comfort. A solid, quarter-sawn, Grade-A mahogany neck is carved in the slim early ´60s profile that Zappa preferred, which measures 0.775” at the 1st fret and 0.910” at the 12th, for superb speed and comfort. It´s topped with a Grade-A rosewood fingerboard with pearloid dot inlays and 22 frets made from wire based on precise measurement of the jumbo frets on the original “Roxy” SG. Like FZ´s guitar, the neck is natural mahogany, and the headstock is white.

The modified electronics on FZ´s original “Roxy” SG were a big part of that guitar´s mojo, and Gibson USA goes all out to replicate that versatility in the Frank Zappa® “Roxy” SG. Two enhanced ´57 Classics with four-conductor wiring replicate the same thick, juicy tone of the humbuckers Zappa added to his guitar. They are routed through a pair of mini-toggle switches mounted in a channel under the pickguard, to yield coil-splitting for single-coil tones, and out-of-phase tones, both of which were a big part of Zappa´s signature sound. The remaining control complement includes the traditional three-way toggle selector and an independent volume and tone control for each pickup.

Tremolo was a key part of FZ´s signature sound, and the Frank Zappa® “Roxy” SG is loaded with a Maestro-style vibrola with decorative Lyre tailpiece and flat bar handle to give the same creative kick to your own playing. A Tune-o-matic bridge offers precise intonation, while a set of Grover™ tuners with historic rounded buttons are both efficient, and true to the look of the original guitar. The guitar carries the smaller early ´60s five-ply SG pickguard with special dimensioned neck spacer to alter the position of the neck pickup to match FZ´s original guitar and a traditional black truss-rod cover.

FRANK ZAPPA is a registered trademark of the Zappa Family Trust.

Now Gibson USA recreates, with the cooperation of the Zappa Family Trust and Dweezil Zappa, Frank Zappa´s legendary SG in perfect detail with close, hands-on reference to the original guitar, to bring the Frank Zappa® “Roxy” SG to anyone seeking an extremely versatile and superbly playing modified-vintage SG Standard.