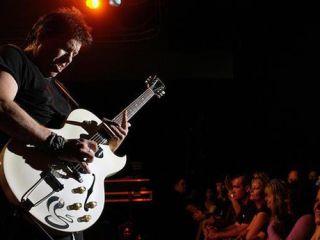 George Thorogood knows slide guitar. Whether it's a timeless original like Bad To The Bone or one of the dozens of classic cover tunes he's tackled, when he lays metal to metal, the crowd-pleasing blues-rocker makes his Gibson ES-125 scream and growl.

"You gotta love a guitar," says Thorogood, "but sometimes it helps to get mad at it, too. Extract vengeance. That's particularly true when you're playing slide.

"Some people think that because you have this shiny piece of metal on your finger that you're going to be playing all graceful," he says. "Not me. I been known to use a piece of copper pipe and rough it up with sandpaper - make it scratchy so it can dig into those strings. You gotta make 'em fight back."

By Thorgood's estimate, his love affair with slide guitar began in 1970, when he first heard Robert Johnson. "A life-changing event," he says. And it just so happens that the mythical king of the Delta blues tops George Thorogood's list of favorite slide players:

"He's the best," says Thorogood. "He was the Jimi Hendrix of his time. Preaching Blues, Terraplane Blues - I love 'em all, but those two really messed me up. Turned my soul around three times over, man.

"Robert Johnson was the strongest thing I'd heard since The Beatles. When that sound hit me, that pure…he was the genuine article, you know? It stopped me in my tracks. Made me shiver. Made me look at everything in a new way. That's what great art does.

"I can't describe what's so special about his technique, because to speak of it is to spoil the deed. How do you explain the sunset? A beautiful woman walking down the beach? A child laughing? For some things, there are no words. That's how I feel about Robert Johnson."

"Man, he blew my doors off," says Thorogood. "When I first heard him, I said, 'That's it. I have to do that. I have got to play slide guitar!' Another life-changing moment.

"Dust My Broom, Dust My Blues, Please Find My Baby - they're all basically the same, just with different words. But they're all killer, and each one will knock you down so hard you can't get up again.

"Funnily enough, I got into him because of The Beatles. Remember that moment in the song For You Blue [from the Let It Be album] where George Harrison goes, 'Elmore James got nothin' on this baby!'? That made me say, 'Wow, so there's somebody The Beatles think is as heavy as The Beatles, huh? OK, I'll check him out.' Turns out, they were right."

"Talk about one spooky player," says Thorogood. "John Hammond is from another planet. He can get that slide going and just lose himself. You start to think, If the world ended tonight, that's OK 'cause I'm hearing this. That's the mark of a genius.

"Preaching Blues, I Can't Be Satisfied - anything he does is scary and thrilling and beautiful. All he has to do is look at a slide and music comes out of it. Some guys have that gift. Great singer, too."

Next: Last but not least

(Warning - video may be considered NSFW.)

"A true master," says Thorogood. "He's like the Ted Williams of slide guitar. [Williams was a Boston Red Sox baseball legend.] There's a famous quote about Ted - 'There goes the greatest hitter who ever lived' - and that the way I feel about Ry Cooder.

"Nobody plays slide like he can. I hear him and I'm like, 'That's not fair!' [laughs] You know what I mean? It's like, 'That's just not right. A human being shouldn't be allowed to be so damn great! And if so, then why the hell isn't it me?' [laughs]

"I love the work he did for the movie Performance. Memo From Turner? Fantastic. It's stinging - sweet but biting. And his playing on the soundtrack for that film The Long Ryders? Gimme a break already! It's like Ry Cooder invented slide guitar. I mean, I know he didn't, but man, he makes you believe it.

"And when you get right down to it, that's what music is all about. Nobody knows who invented it - the cavemen, I guess - but if somebody can make you hear it new and fresh, well, that's a golden moment."

George Thorogood & The Destroyers' new album is called The Dirty Dozen - out now.