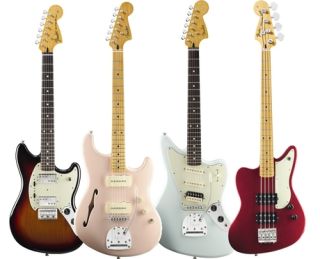 UPDATE: Fender has now 'officially' announced the new Pawn Shop models, check out the press release and gallery on the links below.

Fender has unveiled a first glimpse at four new additions to its Pawn Shop range, which showcases "guitars that never were but should have been".

Posted on the company Twitter feed with the simple message "Coming soon… Pawn Shop 2.0", the above picture showcases four new models, which will join the existing Mustang Special, Fender '51 and Fender '72 in the Pawn Shop range.

As far as we can tell from the image, the new additions include the following models:

- A Mustang Special with Sunburst finish

- A new variation on the Fender '72 semi-hollow body, equipped with Jazzmaster-style pickups, a 'floating' vibrato bridge, volume and tone controls and a toggle-switch pickup selector

More news as we have it, but what do you think of the new models? Worthy additions to the Fender range, or worthless and deranged? Let us know via Facebook and Twitter!