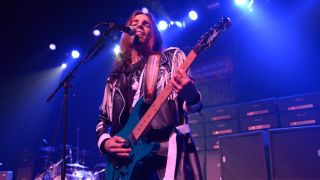 Since graduating from the Berklee College Of Music in 2004, Boston-based guitar virtuoso Ethan Brosh has released two well-received instrumental discs (Out Of Oblivion and Prog Around The World, both from 2009) and has attracted admirers such as Yngwie Malmsteen, George Lynch and Jake E. Lee.

This year, Brosh became the inaugural artist on drummer Carmine Appice's new label, Rocker Records, and released his third studio disc, Live The Dream. Brosh sat down with MusicRadar recently for a little something we call Famous Firsts.

"It was a classical guitar my parents bought me for the equivalent of about $45, brand new from the local music shop. I was 12 years old, almost 13, at that time.About 10 months later, I got my first electric guitar, which was an Ibanez RG-760. I still have it all these years later."

"That was Iron Maiden! I found a tape of Number Of The Beast in my older brother's collection. Someone had randomly given it to him for a birthday at some point. I, of course, noticed the genius album cover Derek Riggs painted for the record, and that made me listen to it. I had no idea electric guitars could make that sound! I just had to learn how to do that. No YouTube or internet back then, so you just had to figure things out somehow. There was magic to that, for sure."

"If I'm not mistaken my first guitar teacher taught me the first solo to Knocking On Heaven's Door, the Guns N' Roses version. It was still on classical guitar before I even got my first electric guitar. I also asked him to teach me the first leadfor Iron Maiden's Afraid To Shoot Strangers, but that might have been second.

What was your first really good guitar?

What was the first band you were in? What was it like?

"I've been through a lot of projects and a lot of things that really didn't go anywhere. It really wasn't until I started Burning Heat with Carlos Araiza that I felt I was really in a real band. Being in a band is probably the same on any level. It's about the e art of human beings interacting with each other. There are conflicts and disagreement, but it's a special brotherhood or sisterhood that can't be found anywhere else. Dave Mustaine said it best: 'Playing music together is as close as two guys can get to each otherwithout having...' - well, you know. That is a very true statement. You can meet someone you've never meet before, jam with them, and if it goes well you'll feel connected to them on a deep level very quickly."

What was the first guitar you got that made you feel as though you had found "your sound"?

"Hmm... that's a tough question. In a way, I'm still searching for and developing my sound. I like many different guitars, who are all a part of my sound. I no longer believe in a perfect guitar or a perfect tone; there are many different tones that work for different situations. Also with electric guitars, amps are like the other half of the instrument, in my opinion."

"I absolutely love playing in front of a lot of people. It's the greatest feeling in the world! But I still haven't played to what I feel is a big audience. Working on it, though!" [Laughs]

"The first guitar hero of mine that I met was George Lynch. Now he's a good friend, and of course, he's still a huge influence. Just recently, I got to finally meet Jake E. Lee and spend some time with him. I was very happy to see that he is such a great guy - another huge influence on my playing."

"When that happens, I'll let you know! [Laughs] Up until a few years ago, any money I made went into buying more and more gear, Nowadays it's pretty much reinvesting in my career. What else would a guitar player do with his money?" [Laughs]

For more information on Ethan Brosh, visit his official website.