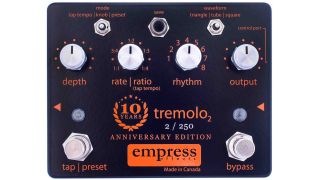 Empress Effects is celebrating its 10th anniversary with a limited-edition version of its first tremolo pedal, the Empress Tremolo.

Only 250 pedals will be made, each with its serial number engraved on the front of the pedal.

$10 from each Tremolo will go to Ottawa's Big Sky Ranch animal charity, while serial number 1 has been signed by longtime Empress Tremolo player Andy Summers, and is being auctioned for charity on Reverb.

10 pedals will also be given away - head over to Empress for all the details.