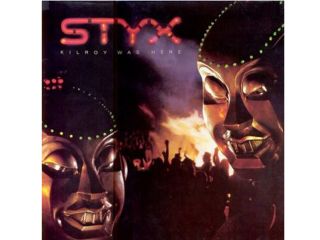 Of all the touching speeches at last night's 81st Academy Awards, one truly stood out - and it was the least expected. It was when when Japanese director Kunio Kato finished his 'thank yous' with the words "Domo Arigato, Mr Roboto."

Holding his golden man after winning Best Animated Short Film for La Maison et Petits Cubes, Kato, speaking in halting English said, "Thank you, all my staff. Thank you, my producer. Thank you, Academy. Thank you, animation. Thank you my company, Robot. Domo arigato, Mr Roboto. Thank you very much."

Here it is below:

Kato's truly weird reference to a Styx song was, well, truly weird, and it was met with laughter by the audience. (The fact that 'domo arigato' literally means 'thank you very much' was no doubt lost on many of the attendees, not to mention millions of TV viewers.)

So why mention Styx, one of the most-reviled bands of all time? And why bring up a song from their feeble attempt at a concept album, Kilroy Was Here, perhaps the worst in the entire Styx cannon? (Think about it: that's really saying something.)

We're still scratching out heads. While we're strolling down the lamentable memory lane that is Styx, let's recall the gaseousness that was Mr Roboto.

And while we're at it, let's remember that these knotheads had the gall to hurl this crime against humanity at us as well.

Some things are just unforgivable.