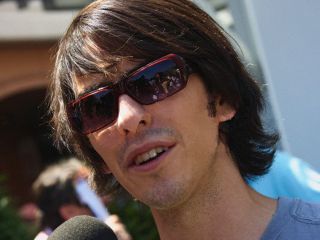 Harrison looks forward to the launch of The Beatles: Rock Band at E3

Dhani Harrison has been working behind the scenes on The Beatles: Rock Band. But in two weeks, at the E3 Electronic Entertainment Expo in Los Angeles, he'll step out and give people their first real look at the hotly anticipated video game.

"We look forward to launching it at E3," says Harrison, son of the late George Harrison. "There's going to be a big demo. I'd love to say more, but I'm contractually obliged not to at the moment." He laughs and says, "Soon enough, though."

Harrison, 30, who describes himself as a "gamer," has been involved in practically every aspect of The Beatles: Rock Band since the beginning.

"I became friends with the guys at Harmonix, especially [company CEO] Alex Rigopulos. When the idea [for the game] came up between us just in jest, we didn't think it would happen. But it was such a good idea."

Once the project got rolling, Harrison became obsessed with ensuring the game's accuracy. "There's still a couple of mistakes in it, but we'll get it right. There's always headaches involved with working on something of this magnitude, but every time we get stressed out, we just go and play the game. It's so much fun!"

Harrison has nothing but praise for the folks at Harmonix. "It's a great company. They're just the nicest, easiest group of people - they're crazy and creative. We're a good fit."

Once The Beatles: Rock Band is released on 9 September, Harrison hopes to start work on the next edition of Rock Band. "I love designing games and working with computers. Besides music, techology is my greatest passion."

Speaking of music, Harrison's band thenewno2 have just released their marvelous debut album You Are Here. Check back in with MusicRadar next week for an exclusive podcast interview with Dhani Harrison, in which he discusses the new record, the prospect of touring and The Beatles: Rock Band.