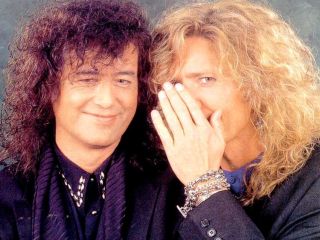 Even in '93, Coverdale gave Page an earful

Jimmy Page has probably had it up to here with advice on what to do with Led Zeppelin. But that hasn't stopped David Coverdale from giving the guitarist an earful recently.

The Whitesnake singer told Page to forget about trying to reunite Led Zeppelin and to focus on touring and making an album using guest vocalists.

According to the Pulse Of Radio, Coverdale, who worked with Page in the early '90s for a one-off album and tour, told Uncut, "My suggestion to him when I saw him in the summer was to do what Carlos Santana did with Supernatural.

"Get a selection of people in, because there's no question John Paul Jones writes fucking kick-ass music. I said Joe Elliott and me would come in and do a track rather than the focus be on one person."

Even to David Coverdale, a Led Zeppelin tour without Robert Plant isn't Led Zeppelin, and he's dubious as to how such a tour would go over with the public.

"Will people be willing to see three-quarters of the family with a guest - a cousin twice removed? I'm as curious as anyone to see how it works out. Change is good as long as you fucking deliver. I hope it comes together for him because, Jesus, he deserves it."

Working with Page was a high point

Coverdale admits that working with Jimmy Page in 1993 remains one of his most treasured musical undertakings, and the experience led him to rethink how he chooses guitarists for Whitesnake.

"When I worked with Jimmy Page, that was totally inspiring for me, and you can hear that on the Coverdale-Page album," he said. "And that was a great parameter for me to look at. The only people I would be prepared to work with are ones who would, who I'd feel could drive me, inspire me to go for notes I've never gone for before."