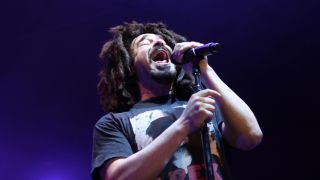 Counting Crows are about to start a six date UK tour

In part two, Adam steps back from the live show to where it mostly begins: his head and a piano. Sure his head is still a little fuzzy, but it's filled with lyrical gems just waiting to be unearthed and turned into a Counting Crows song.

In no way is he a one-man band, though. "Being a solo artist wouldn't be challenging enough," he quips. Plus, he's super proud of what his fine feathered friends have achieved. Got a notepad but no lyric? Take a line from this story-teller's book and get started...

If someone said, 'I want to write my first song. How do I come up with a lyric?' What advice would you give?

"Start with a moment where you 'feel' something. I remember reading A Moveable Feast by [Earnest] Hemingway and he said, 'Start with just one true thing.' When you start with something true, a line will come and everything proceeds from there. It's not a diary, it's not a news story. It's an expression of how you feel. The story can be fiction as long as the feeling is real. For example, I could be playing piano, singing, and a line comes along like, 'A long December and there's reason to believe maybe this year will be better than the last.' The rest is me following the thread of that thought."

Do you need 'real time' stimulus or can you write from imagination?

"Both because the best way to talk about things is to not just talk about what you're feeling. You know, describe the room you're in and how you're feeling will come through in the details. It's not enough to say, 'She was so beautiful across the room.' Talk about the way light falls on her face. That says how it feels to look across the room and see her. Details are important. They give form to your thoughts."

Do you re-live emotions and re-imagine peoples and places when singing your lyrics?

"It's not so much taking myself back as it is bringing that moment forward. A song is like a coffee filter where you pour your daily life through it. Each day is a different way of experiencing the song. The point is, it can always be present tense and it should be because your feelings change. The way I felt dreaming about becoming a star when I wrote Mr Jones is different to the way I feel now. It was never just a song about becoming a rock star, it was a song about knowing - even when wishing for it - that all of those things aren't gonna work like that. You know, "When everybody loves me I'll never be lonely"? That's not true, and I knew that when I wrote it. Everybody loving you is not gonna change a god damn thing about how you feel about yourself."

Do you collect experiences as potential lyrical inspiration?

"I've been trying to remember things as they come but it's more musical in substance at that point. I'm using my phone more, humming tunes into it as they come, then I'll work on them when I get home - I tend to sit at the piano. Writing hasn't been my focus the past few years because I've been trying to get less crazy. Now I'm getting back to it."

Is it exciting going back into that writing frame of mind?

"Sometimes. I'm writing 'cos I think I should, but I'd just like to get my head working better; be less crazy. There was never anything more important to me than writing and playing but in the last few years I've started to feel like that wasn't the right priority. When you're young and excited about where you're going, it's easy to say there's nothing more important. Things like mental illness... you just figure it will straighten itself out and that in the meantime you should just enjoy being crazy and writing songs. But when it doesn't straighten itself out and you realise the quality of life is kinda low and that being a rock star, which you thought would fix all that hasn't, then it's like, 'Hmm.' Survival has become a lot more important the past few years."

Do you think in some 'bigger picture' way you have more to draw upon now?

"I always saw music as the thing that was gonna save everything else but it didn't. I realised after a while that the songs provided solace for others but they didn't solve the illness for me. In fact, it kind of exacerbated it because I kept coming home to hotel rooms in weird places with my head spinning and reality seeming very distant. I was allowing myself to believe [music] was going to make everything fine. While everyone's telling you you're an idol, that makes it better for a second but you realise it's not gonna fix you - you're gonna go back to that hotel room and still be crazy. I used to believe [music] would provide the answer but it doesn't. You have to figure that out for yourself. If I get that figured out, maybe it will provide clarity and inspiration. But while you're living it, it's hard to do. I started resenting writing a few years ago because it was providing comfort to everyone but me."

Lyrics are important to a song's appeal yet album reviews rarely comment upon them. Does that burn you after putting so much of yourself into them?

"When I write a song it's just lyrics and chords. That act of becoming a Counting Crows song is the work we do together. That's my favourite part of being in a band. It's so easy in rock 'n' roll to be flashy and get a name - to become a famous drummer or guitarist - but I don't think people understand what it truly is to be a band. I don't think people get what's so great about the Stones or Fairport Convention. It's much easier to notice somebody sticking out than it is to notice a bunch of people playing together.

"From Day One, listening was more important than playing; basing your playing off what the other guy's doing. Listen to All My Failures and you'll hear the band chasing itself around: the littlest things in the acoustic guitar that get a reaction from the electric guitar that get a reaction from the drums and bass. I'm so proud of that stuff and wish people would notice it more."