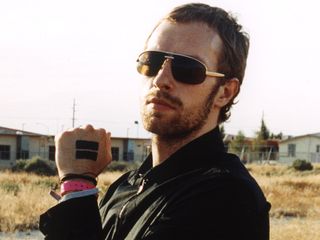 Chris Martin has been banned from the studio while the rest of Coldplay begin recording the follow-up to 2008's Viva La Vida. Brian Eno is back on-board as producer, but insisted that Chris Martin should stay clear for the first two weeks.

In a letter addressed to Coldplay, Brian Eno suggested that Viva La Vida would have been a much better album without the meddlesome frontman "getting in the way."

"He said that he thought the last album was 'OK' but it could have been much better," Chris Martin told Absolute Radio. "He said that he still wanted to work with us on the next album but that I was banned from the studio!"

"He said that it would be better without me for the first two weeks - 'You can do better without the singer!' he said. It has turned out to be a good idea though because the band's been free to try out loads of weird things without me getting in the way."

We're sure this is merely Chris Martin downplaying himself, but it does suggest that Brian Eno wants to avoid over-complicating the sound. Although, if the rest of the band are freestyling with "loads of weird things," who knows what to expect...