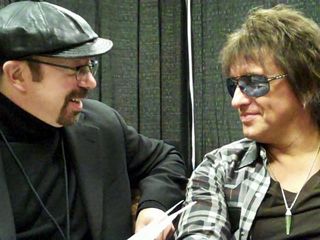 Just a couple of Jersey guys hanging out

Richie Sambora was in Connecticut the other day with Bon Jovi to play a show for an intimate crowd of only 5000 screaming fans. Before the gig, however, the engaging New Jersey guitar star sat down with MusicRadar to tackle a rather serious matter: answering your questions.

Fresh from a sound check at the Mohegan Sun Resort and Casino - a venue that's a fraction of the size of the joints Bon Jovi will be rocking later this spring and summer, such as the 80,000 capacity Giants Stadium (the band has sold out three nights) and what is now a 12-night residency at London's O2 Arena - Sambora was in an effervescent mood.

"So far, everything's beautiful, man," the guitarist, singer and songwriter said. "We're doing lots of songs from the new album, The Circle, and people are digging them. Shows are sold out. We're playing the world...I can't complain. Life is good."

As expected, MusicRadar was deluged with questions for Sambora, and we did our best to ask as many as possible in the time allotted (in the coming weeks, we'll present a podcast interview with the guitarist which covers a wide range of topics). Is Bon Jovi coming to your town? Is Richie waiting on a new Martin double-neck? Is he planning a new solo album?

Sit back, check out the video and find out.