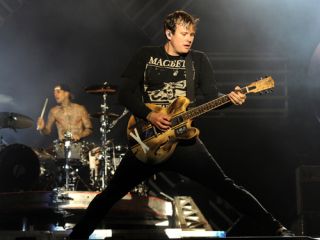 Blink-182 might never be mentioned in the same breath as Dream Theater (although we just did it, didn't we?), but the pop-punk band is indicating that they're incorporating prog-rock stylings on their upcoming album, Neighborhoods.

Regarding the wide gap between their last album and Neighborhoods, bassist/vocalist Mark Hoppus said, "After not really having worked together or even been friends for a few years, it took a couple of months to kind of find that this is how it all works."

On a more serious note, Hoppus discussed the nature of the album title: "We heard Thriller was taken. We heard 'The White Album' was taken and Pet Sounds apparently was taken, as well. Who would've thought that?"