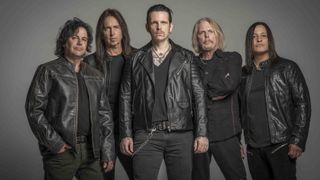 "Before Scott gave me the gig in Thin Lizzy, I'd never stood on stage without a guitar in my life," begins Star Riders frontman Ricky Warwick.

"So I'm 44 years of age, playing my first gig holding a guitar fronting Thin Lizzy staring at 2,000 people in Aberdeen, thinking 'What the fuck do I do with my hands?'"

As far as first gigs go, Ricky's debut in Thin Lizzy was a bit of a nail-biter. He was replacing the irreplaceable, and fighting against what his bandmate/Lizzy original Scott Gorham recalls as "the worst stage sound of all time". He could have given in, but he chose to play harder and sing louder.

It's that fighting spirit that has gotten Black Star Riders to where they are today - three albums in and still producing music that can live up to the legacy of all legacies.

Following the addition of American guitarist Damon Johnson, the modern-day incarnation of Thin Lizzy chose to record under a new name out of respect for legendary founder and frontman Phil Lynott, eventually discovering their own way to coexist with the past.

"What we've said is all our energy will be on BSR," nods Scott.

"We've made that commitment and we're going to play our new stuff. If there are events to do as Lizzy, sure, we'll consider a few gigs. But a six-month tour is not going to happen…"

For Scott and his bandmates, the reaction to the BSR shows - which usually only feature a small handful of older gems - has said it all. The classic rockers have only been around for five years, but in that time they've learned they belong very much in the now.

"The fans were really happy to see Thin Lizzy back," says Damon, "but they were all excited about the new BSR record, too. When we recorded the debut in 2013, we had no idea this would ever happen. We doubted we could get to this place: where there are two entities that each have their own place.

"People seem to respect us for what we've done rather than being a tribute to 40-year-old songs… because there are bands that do that. Each to his own, but don't you want to push yourself and continue to create? How is a songwriter different to a painter or architect or writer? You're always thinking about your next project, building or book."

"Last year felt great because we only did half-a-dozen festivals as Lizzy," chips in Ricky. "And all those shows felt special… I really enjoyed them. It felt like an event every time we played. Looking around and seeing Scott doing his thing, plus we had Tom from Aerosmith on bass, Scott from Judas Priest on drums, which was pretty fuckin' cool!

"The fact BSR is a working band of its own is a testament to the songs. We don't need to rely on the Lizzy hits to back us up; we've got this other thing that's relevant, that people appreciate. It would have been doomed from the start if the fans didn't believe in us."

It only takes one listen to new album Heavy Fire to understand why the fans have stayed loyal to their cause. There's enough nostalgia for it to be familiar territory to any Lizzy diehard, but make no mistake, BSR sound like a modern heavy rock band.

As with last album The Killer Instinct, Scott and his bandmates put a lot of their trust in Grammy-winning producer Nick Raskulinecz (Foo Fighters, Rush, Alice In Chains) to capture the magic.

"The first time we recorded with Nick, we brought all of our own stuff because we wanted to feel comfortable," remembers Scott.

"But we soon realised we weren't really using our own gear; we were using his. He has this vintage museum of old gear, with 20 amps lying around in the studio, with a core of about six heads we mainly stuck with. There was a Bogner Shiva there… I'd never have found it if weren't for Nick's collection.

"I love my Marshalls, I loved my Engls for a long time. You tend to rely on what you know and when someone suggests something else, you might think 'Shit!' until you hear that first chord and realise it actually works. I pretty much stuck to my main Les Paul but Damon changed around quite a bit."

"He'd be thinking about a song and would say, 'I'm gonna put Scott in the Orange and the Hiwatt together to create the rhythm sound' and I don't think there was a single time we felt we wanted something else.

"The guy is special… it's not an accident his records sound that good. There's a lot to do with the performances he gets out of the band and how he lets every individual express themselves on each song."

"I've got this great early '80s Korina Explorer," he grins.

"Nick was blown away: first amp, first powerchord! So there were multiple times he felt we should stick with it. Ricky played Nick's '50s reissue Custom Shop Telecaster; that's what you hear on the second track, When The Night Comes In. Lying around the studio, Nick also had this three-pickup SG and a beautiful Flying V, which sounded like pure stoner rock!"

Three noisy guitarists turning up to your doorstep might sound like the sort of thing that keeps producers awake at night, but luckily for Nick, BSR are the kind of band that operate with an air of ease and democracy. There are no battling egos or power struggles - this is a band with the experience to know better.

"The way I look at it, we're all riding the same buses and planes," shrugs Scott. "No-one is trying to sharpen their elbows, there's more of a feel thing going on."

"It all comes down to Scott; he's been so gracious," smiles Damon. "He shares the moment with us. He could easily be the guy saying, 'Look kids, this is my band, stay the fuck away from this part of the stage…' He honestly could! But Scott's not like that at all."

While Scott and Damon are more responsible for detailing the compositions, Ricky prefers to stick what he does best and sketch a more rough outline of the ideas…

"I just come up with a lot of rough guitar riffs, but I'm nowhere in the same league as these guys as players," he laughs.

"So I hand them over and say, 'Make this amazing… or else!' And they do. I'm all about the song; that's what I bring to this band. I'm not a great guitarist or singer - I know my limitations - but I'm a good rhythm player. If you need someone doing that and singing for two hours… I'm your guy!"

Scott points back to Ricky facing the odds at his Aberdeen debut as a turning point in their career together, perhaps even the moment he realised the singer was indeed 'his guy'.

"Can you imagine?" he ponders. "First show and nobody can hear anything. And poor Ricky had to stay put and do that shit… which he did! Talk about a trial by fire. Everyone's pulling their weight in a big way. I really couldn't do this shit on my own."

Heavy Fire is out on 3 February via Nuclear Blast. Black Star Riders tour the UK in March:

W/ Gun and The Amorettes