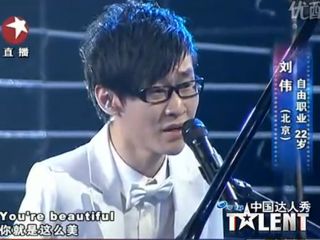 Liu Wei's got enough talent for the whole world

Any time you're feeling down about your musical advancements, let Liu Wei serve as inspiration. The 23-year-old armless pianist, who plays the instrument with his toes, won China's Got Talent after he performed a stirring rendition of James Blunt's You're Beautiful.

Wei's arms were amputated after he suffered an electrical shock while playing hide-and-seek when he was 10. At age 18, he decided to pursue a career in music, using his feet to play the piano, much as he uses them to navigate on the computer, eat, dress and brush his teeth.

Before a packed audience at the Shanghai Stadium, Wei blew away his competition. And, as The Shanhghai Daily reports, Wei's positive outlook won over the judges when he made light of his situation, saying, "At least I have a pair of perfect legs."

No matter what you think of James Blunt's song, you simply can't watch the above video and not root for Wei, who now has a shot at a record contract after his victory.