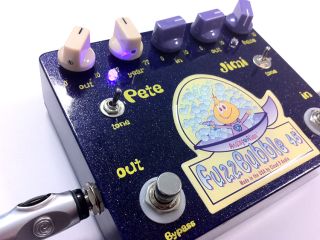 Boutique fuzzboxes are ten a penny - make that a dime a dozen for our friends in the US - but sometimes a unit comes along that's a little bit special, and the Analog Alien Fuzz Bubble 45 from Cloud 9 Audio is one such stompbox.

Boasting a pair of channels with very different voicings, the Fuzz Bubble 45 is almost two pedals in one. On the one hand, the Pete channel is designed to sound like a vintage tube amplifier pushed into overdrive, with the level of gain increasing as you cycle from '67 to '77 using the year control.

The other half of the equation is the Jimi channel, which as its name implies is a killer Fuzz Face-style circuit capable of everything from mild fuzzy textures to full on meltdown.

Indeed, while the channels are obviously named after Messrs Townshend and Hendrix, it's equally possible to set the Fuzz Bubble 45 up to channel the raunchy sounds of Dave Davies and The Black Keys and numerous other hot retro tones. Think small combos with their speakers slashed driven to the point of combustion by dirty garage punks, extraterrestrial lead guitar sex gods with walls of burning amplifier stacks and many cool points in-between.

The Fuzz Bubble 45 is available now for $179.99 plus postage. Visit the Analog Alien site for more, but first, be sure to check out our video demo to hear this killer pedal in action.