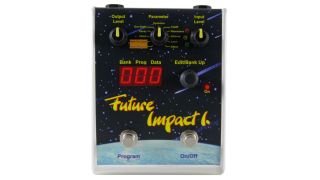 Akai's Deep Impact bass synth pedal didn't last long on the shelves following its introduction in the mid-'90s, but its fat tones won a host of favourite fans, including Muse's Chris Wolstenholme and Jamiroquai's Paul Taylor. Used models currently sell for £600/$1,000+, but thankfully, Panda Audio has set out to refine and reissue the pedal as the Future Impact I.

The new version packs 99 presets compared to the original's nine, as well as a desktop PC editor, 128kHz sample rate and MIDI in/out, plus it draws a modest 70mA from a 9V power supply.

Muse's Chris Wolstenholme is already a fan, enthusing: "The pedal is just as good as the original, which is what as I was hoping for. The new presets and bank space are a bonus, too."

Consider us convinced, then. Panda Audio's Future Impact I bass synthesizer is available to order now from Godlyke Distribution for $499.