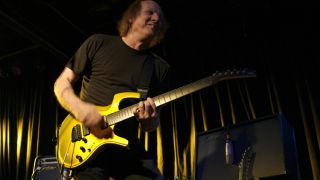 "I'm really proud of all the stuff that we were able to accomplish."

As a man who has worked with a who's who list of artists and bands - we're talking David Bowie, Frank Zappa, Nine Inch Nails, Paul Simon and even William Shatner - Adrian Belew can be assured of a sizeable legacy.

But, for many, he will be best remembered for his mammoth stint with prog masters King Crimson, which spanned 33 years and eight albums. Now, along with fellow Crimson alumni Tony Levin and Pat Mastelotto, Belew is out on the road acknowledging his past with the Crimson ProjeKCt.

MusicRadar spoke to Belew about putting the ambitious six-strong Crimson Project line-up together, getting Crimson mainman Robert Fripp's approval, and walking away from Nine Inch Nails...

How did this Crimson ProjeKCt come together?

"Tony Levin, Pat Mastelotto and I decided to do a band camp. We now do it every summer. The first year we did it, one of the things we had decided to do was to play a concert for the campers on the last evening. In doing that we had to scramble how we were doing to play with each other.

"What we ended up doing was bringing in my trio and Pat and Tony's trio. You had the Adrian Belew Power Trio and the Stickmen with Pat, Tony and Markus Reuter. We put on a show in which each band played a little bit and then we had some songs we could play together. That was the genesis of it. The next year happened to be 2011. and that was the 30th anniversary of Tony and myself joining King Crimson. We thought it'd be nice to play some Crimson music and celebrate it.

"We knew Robert [Fripp] would not be interested, but I called him and he gave us his full support. He even named the band the Crimson ProjeKCt for us. I said, 'So you're OK with us going out and playing this music?' And he said, 'Yes, as long as I don't have to go!'"

Was it important for you to get Robert's seal of approval?

"Sure. I wouldn't want to do any music that partly belongs to him and partly to us without his approval. I wasn't sure how much of the Crimson name or legacy we could rely on. I didn't know what we could and couldn't say. It turns out as long as we don't call it King Crimson he is fine and perfectly happy. We're making this music vital and fresh again."

You must be immensely proud of your time in Crimson...

"Absolutely. It was 33 years on and off. That's a big chunk of life. I'm really proud of all the stuff that we were able to accomplish. We travelled around the world and played for so many people. Some of the music still works and seems timeless. It's a great part of my legacy and I'm happy with it."

You've got a six-man line-up in Crimson ProjeKCt, described as a double trio. How does that work?

"You'll have the Stickmen playing a 45-minute set, Power Trio play for 45 minutes (both including some Crimson stuff), then we have a break where Tony, Pat and I play as a trio for a song or two, and then the full six-piece band comes out for more than an hour of Crimson material."

Did it take some work to get that final six-strong line-up locked in?

"It came together quickly. These guys are all great players that know the music. Even my bassist Julie Slick, who was only 20 years old when I met her, she was raised on King Crimson music, so everybody knew and loved the music and respected it. The double drumming thing just seems to work."

Chemistry must be a key part of that line-up working so well?

"I call this the Fun Crimson. We have a lot of smiling and fun on stage. Most of us have known each other for a very long time and played together in different formations. It seems like I've known Pat and Tony since I was a kid."

"We're either very brave or pretty stupid because we just show up and start playing together. It seems to work. The cost and the time of getting everyone together to have a proper rehearsal is not in our budget. What we do is we spend time at soundchecks and learn things there."

Is this the best chance most fans will get to hear this material played live?

"The Crimson ProjeKCt is meant to celebrate the music - we're not trying to rewrite it. We just play it the right way with the right spirit and intensity. Crimson's music has always came to life on stage. I think our records are great and sound great and represent that moment in time, but the music has always been designed to be played live. That's where the real fireworks happen. That's another reason why every now and then I get the urge to go out and play this stuff again."

With so much material to draw from, is putting a set together a real task?

"It was down to Tony, Pat and I just seeing what we could do and looking at what we wanted to represent. We came up with a lot of favourites that everyone agreed on. My trio already played six Crimson songs and I think Stickmen played a few, so we had those in our back pocket. The double trio opens the whole catalogue up."

Why do you think interest in King Crimson material remains so high?

"I think it's the music itself. I think King Crimson's music is one of a kind. I can't think of another band that sounds like King Crimson."

What gear will you be bringing to the UK with you?

"I'll be using my Adrian Belew Parker Fly guitars. They're Parker Fly guitars with updated electronics. I use the Fractal Axe FX. I also run the Roland VG-99 Virtual Guitar system as a second set of guitar sounds to overlay. We do so much international work that I've tried to get a system that I can pretty much carry on [a plane] with me. I don't take any amplifiers or anything. I can do everything that I could before when I had four amps and two pedalsboards, keyboards and everything else. That's the beauty of technology - it keeps downsizing itself."

And what is the plan for Crimson ProjeKCt beyond this tour?

"I don't know how much longer we'll go on but we keep getting offers. We're coming to Europe and then going to Australia, and I'm hoping to take it South American and complete the world circle. But everyone has other things to do and other irons in the fire. This project is the icing on the cake for us - it's not our main push in life. I have a solo career and all the things that go along with that. But I don't see an end yet."

You were also announced as a new member of Nine Inch Nails last year, only to quickly bow out. What happened there?

"It just didn't seem to be what we were expecting it to be. Trent and I had agreed and went in with the idea thinking that we would somehow be able to reinvent the band and that just really wasn't happening. What was happening is we were just learning the music essentially note for note the same as the records.

"That made me all of a sudden feel redundant. I wasn't really needed - I was needed to help reinvent, and when that didn't seem to be happening we both agreed that I should go on. Apart form the disappointment about not working together and touring and the amount of money I could have made [laughs], the bright side was that I got to go back and continue my projects."