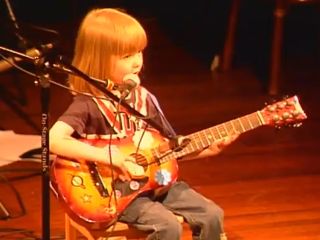 Wesley walks the line, no two ways about it

We doubt five-year-old Wesley's ever been to Reno. And we're pretty sure he's never shot a man just to watch him die. But man, check out the way this cute little tyke interprets Johnny Cash's Folsom Prison Blues in the video below.

Somewhere, the Man In Black is smiling just a little. Or maybe a lot.

Wesley, who lives in Seattle with his mom and dad, studies the guitar with a teacher named Rob Hampton. We can't tell if Rob's doing something extremely right or if Wesley just has a crazy amount of God-given talent, but his version of Folsom Prison Blues...well, it's like he's lived it.

"I think one of the reasons Wesley's such a great performer is that he loves to pretend he's on stage during his guitar lessons," says instructor Hampton.

"We have a routine where I say, 'One, two, three...poof!' and this transports us into the world of make-believe - where Wesley's the performer, and I'm alternately the ticket-taker, bouncer, sound crew and audience. So even though he's only been on a real stage twice, he's imagined it dozens of times."

It shows in this video. Watch young Wesley dig down into some blues - the likes of which we hope he's not yet lived.

Here he is doing a spot-on Hokey Pokey. Sure, he might be giving the people what they want, but pretty soon, this kid is gonna be givin' 'em what they need!