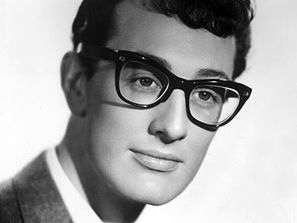 Today (3 February) marks 53 years since the tragic, untimely death of Buddy Holly in a plane crash that also claimed the lives of Ritchie Valens, The Big Bopper and pilot Roger Peterson.

Here are five reasons why Buddy Holly still matters in 2012…

1. Buddy Holly influenced the greatest bands of all time

Buddy Holly was a huge influence on The Beatles in their formative years and his hold over John Lennon would continue throughout his solo career in the 1970s.

The 1995 Anthology series unearthed Lennon, McCartney and Harrison's first ever studio recording - a cover of That'll Be The Day recorded as The Quarry Men - and they would perform numerous Holly songs during their time in Hamburg, later recording Crying, Waiting, Hoping and Words Of Love. Paul McCartney now owns the publishing rights to Holly's song catalogue.

Here's The Stones' rip-roaring version of Not Fade Away from 1964:

2. Buddy Holly made it OK to wear glasses

Holly's optician J Davis Armistead was instrumental in the selection of frames that would become iconic: "Those heavy black frames achieved exactly what we wanted - they became a distinct part of him. Had Buddy lived, I do not think he would have worn contacts or had surgery… those glasses in that heavy dark frame added to his personality and his act."

With their initial twin guitar, bass and drums line-up, The Crickets established the blueprint for what would become the standard for a rock 'n' roll band by the mid sixties. Holly experimented with unusual instrumentation in the studio and the self-contained Crickets could write their own songs.

And when they didn't, just like The Beatles a few years later, Holly would put such a stamp on a song that for many listeners it would become the definitive version. Here's proof:

4. Buddy Holly was one of the first rock 'n' rollers to play a Stratocaster

Along with those glasses, a Fender Stratocaster was the other vital component part of Holly's image. From Hank Marvin to Jimi Hendrix, so many would follow his lead over the following decades.

Whether it's primal Bo Diddley-influenced R&B like Not Fade Away, or a tender ballad like True Love Ways, to our ears Holly's canon still sounds fresh and energised half a century later.

We'll leave the final word to the man himself: